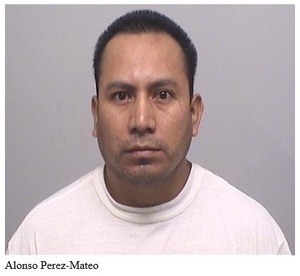 August 8, 2019, Stamford- On May 22, 2019 at about 10 PM, the Stamford Department responded on report of a man down bleeding in the street.  Officers located the victim, Enrique Gutama, unconscious and bleeding on the sidewalk on Frederick Street near Cove Road.  Officers were able to follow a blood trail to 107 Frederick Street where it was later determined the victim was stabbed during a dispute over a “love triangle”.  The victim, Enrique Gutama, age 55, of Stamford, CT was pronounced dead shortly upon arriving at Stamford Hospital.  Stamford Police Investigators within hours of the incident were able to develop a suspect and with the assistance of the Stamford Police Special Response Team were able to safely take Alonso Perez-Mateo, age 30, of 14 William Street, Stamford, CT into custody.  Perez-Mateo has been held since the date of the incident on unrelated criminal charges stemming from an unrelated incident.

After countless interviews and with the assistance of the State’s Attorney Office the Stamford Police Department formally charged Alonso Perez-Mateo with Murder and he is being held on a $1,000,000.00 bond and is scheduled to appear in court on August 22, 2019.  It is our hope that this arrest can bring some sense of justice to the victim’s family.

We are extremely proud of the actions of our officers involved with this case.  The Stamford Police Uniform Division did an outstanding job responding to the incident, identifying the crime scene and identifying witnesses.  This was paramount in assisting the Bureau of Criminal Investigations in resolving this case so quickly.

The teamwork involved in this case is what led to such a speedy resolution.  We would also like to acknowledge the hard work of Sgt. Sean Boeger, Officer Damien Rosa, Louis Burdi and Jerry Junes, their investigation led to the quick apprehension of the suspect and the subsequent arrest.