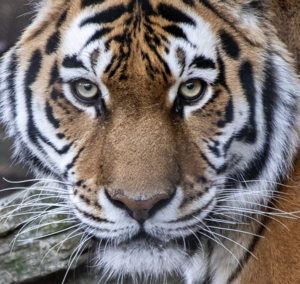 BRIDGEPORT, Conn. – Connecticut’s Beardsley Zoo will say goodbye this week to our female Amur Tiger, Changbai, mother of tiger cubs Reka and Zeya, as she moves to a new permanent home. Born on May 24, 2007, Changbai arrived at Connecticut’s Beardsley Zoo in January, 2017, from the Philadelphia Zoo. Her departure is scheduled for Wednesday, August 28.

Managed by the AZA’s Species Survival Plan (SSP), inter-regional transfers are arranged with careful attention to gene diversity in the hope that successful breeding will take place. Chang was sent to Connecticut’s Beardsley Zoo as an excellent genetic match to the Zoo’s resident male tiger at the time, Petya. In November, 2017, Changbai gave birth to the Zoo’s two remaining resident tigers, Reka and Zeya. Reka and Zeya’s father, Petya, was transferred to Sedgewick County Zoo in Wichita, Kansas, in November 2018.

Amur tigers are very rare, and are critically endangered in the wild. According to the Association of Zoos and Aquariums’ (AZA) statistics, today Amur tigers are thought to occupy less than seven percent of their original range. Threatened by habitat loss and degradation, poaching, tiger-human conflict, and loss of prey, four of nine subspecies have disappeared from the wild just in the past hundred years. The future of the Amur tiger has been a major concern of the world’s zoos for many years.

There is an SSP program in place for many species of animals through oversight by a group called the Taxon Advisory Group (TAG). The SSP makes breeding recommendations based on genetics, age and health of animals, and need for more of the species to protect future populations.

Connecticut’s Beardsley Zoo’s Deputy Director, Don Goff, is the Chair of the National Felid TAG group. He leads a committee of AZA-accredited zoo members whose goal is to save declining species.

“As sad as we are to say goodbye to Changbai, the planned transfer of animals to other member zoos ensures the sustainability of a healthy, genetically diverse, and demographically varied AZA population,” explained Goff.

The Amur, once called the Siberian tiger, is a rare subspecies of tiger, and the largest cat in the world. Adult male tigers can weigh up to 675 pounds, with females weighing up to 350 pounds. Similar to people’s fingerprints, no two tigers have the same striped pattern. Amur tigers differ from other tigers with fewer, paler stripes, and a mane that helps to keep them warm. They live in southeast Russia as well as small areas of China and North Korea. They live for 10-15 years in the wild, and up to 22 years in human care.