Man Walking from Florida to the Bronx

Details
Published on Monday, 11 May 2015 14:36
Written by Wounded Warrior Project 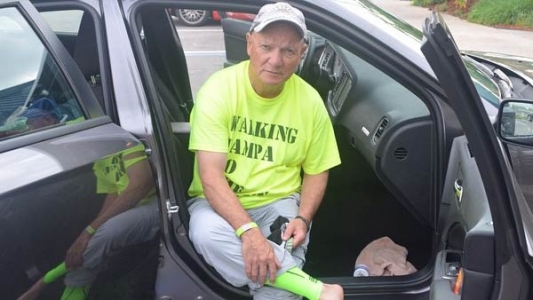 A 65-year-old retired teacher is walking from Tampa, Fla., to the Bronx, hoping to raise $100,000 for the Wounded Warrior Project® (WWP), a national nonprofit whose mission is to honor and empower wounded warriors.

Richard Albero's journey honors the memory of his nephew, Gary Albero, who was killed in the World Trade Center on Sept. 11, 2001. The two used to attend Yankees games together, part of the reason Albero chose this roughly 1,200-mile route. It startedMarch 2 at the Yankees spring training complex, and Albero expects to finish at Yankee Stadium on May 26.

Here's a video of Albero starting the walk at home plate with the Yankees cheering. His effort has since received national media coverage and raised about $25,000.

Albero, a former Naval Reserve officer, walks nearly 20 miles a day. He typically wakes about 4:30 a.m., soaking his feet in Epsom salt while updating his website about the progress he's made and the donations he's received. He then walks from about 7:30 a.m. to noon, has a support driver bring him lunch, which he eats on the roadside, then walks another 2.5 miles. Afterward, there's an early dinner and another soak in Epsom salt.

"It's literally close to a marathon every day," Albero said during a phone interview, cars zooming past as he trekked up a hill along mile 837, nearing Fredericksburg, Va.

He will be in Washington, D.C., and Baltimore the early part of this week.

During the walk, Albero said he's battled wind, rain, cars that come too close and even a huge truck that blew him off the road and partway down a culvert.

"I'm just tired, beat up," he said. "But I think of our nation's injured veterans and all they're going through, and I say, 'How can you complain?'"

While walking through Jacksonville, Fla., Albero toured the headquarters of the Wounded Warrior Project. He said he received a standing ovation.

"It is the generosity of proud supporters like Mr. Albero, and others across the country, that makes it possible for WWP to offer 20 programs and services to injured veterans, their families, and caregivers," said Al Giordano, chief operating officer for WWP.

After reading a news article of Albero's effort, the Epsom Salt Council reached out to Albero about sending Epsom salt to hotels where he will stay. Albero said he learned about Epsom salt from his father, who often used it to help with soreness, and later, when Albero was coaching high school football and baseball, his players also used it.

"It feels like your feet were massaged," he said of the soaks.

The Council is also donating to the Wounded Warrior Project and to Albero to help cover his travel costs.

"It isn't about me, it's about all the people who have contributed," Albero said. "You talk to injured veterans, the people on the front line and what they had to go through, it really gave me more incentive."