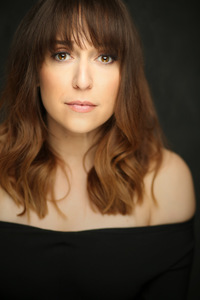 ACT (A Contemporary Theater) of Connecticut is excited to announce that Jessica Vosk will join ACT's Resident Music Supervisor, Bryan Perri, on February 25, 2020 for the Broadway Unplugged Series!

Jessica Vosk played Elphaba in WICKED on Broadway for two years, and recently starred in the NYC Ballet Jerome Robbins tribute SOMETHING TO DANCE ABOUT. Other Broadway credits include FIDDLER ON THE ROOF, FINDING NEVERLAND, and THE BRIDGES OF MADISON COUNTY. Jessica starred as Anita in the Grammy-nominated San Francisco Symphony’s WEST SIDE STORY. This season, she will star in the 50th anniversary of JOSEPH AND THE AMAZING TECHNICOLOR DREAMCOAT at Lincoln Center.

The Broadway Unplugged Series is the brainchild of the accomplished Perri, who is currently working as Music Director and Conductor on the critically acclaimed Broadway musical JAGGED LITTLE PILL alongside Alanis Morissette, Tom Kitt and Diane Paulus. Perri recently finished a ten-year run as Music Director and Conductor of the Broadway production of WICKED, and as Music Director for SUPERHERO, having its world premiere Off-Broadway at Second Stage Theater. Each show in the Broadway Unplugged Series presents an intimate evening where Perri sits down at the piano with renowned Broadway performers for an exceptional evening of never before heard stories, great conversation, and incredible vocals.

ACT’s Artistic Director Daniel C. Levine says, “Jessica is one of the most gifted performers that I know. I’ve been hoping to get her to ACT for a Broadway Unplugged for quite some time, and I am thrilled that it is happening! Audiences are going to fall in love with her!”

Tickets for the February 25, 2020 show may be purchased here. For more information about ACT of Connecticut, ticket and annual subscription sales, education programs, sponsor/donor opportunities, and other theater-related news and announcements, visit www.actofct.org.