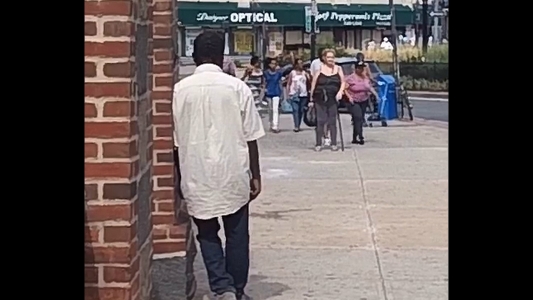 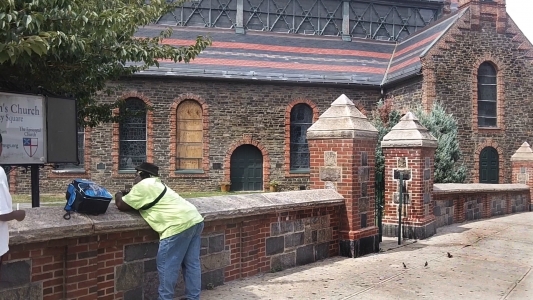 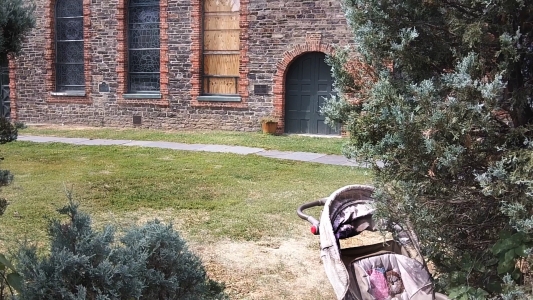 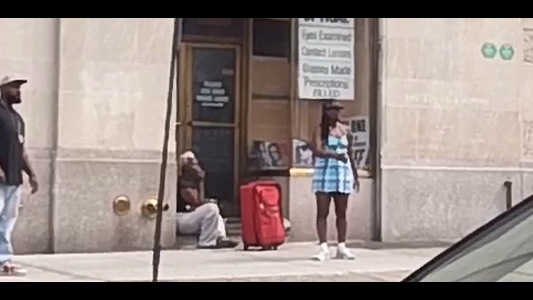 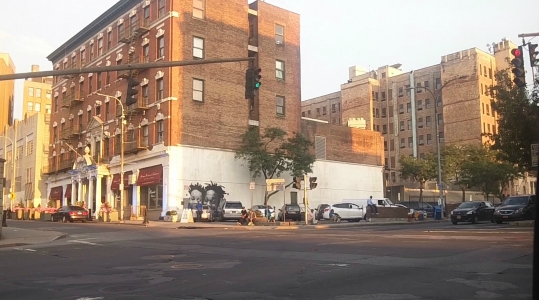 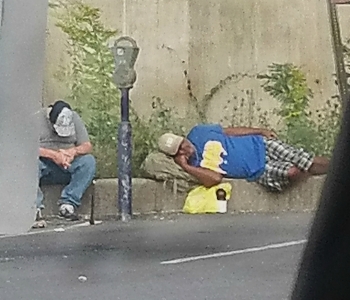 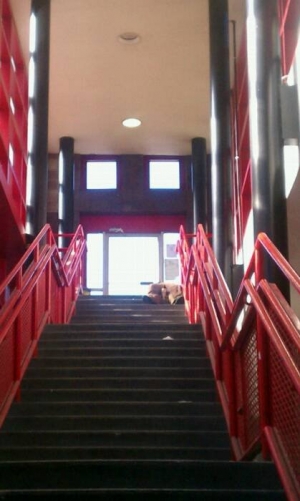 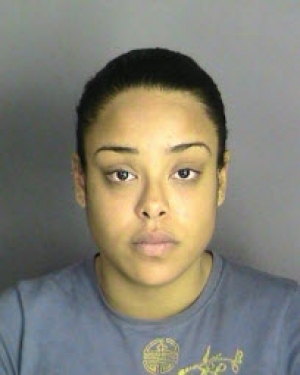 The City of Yonkers sheltered homeless population accounts for 43.3 percent of all homeless families in Westchester County. One of the Yonkers facilities caring for homeless people is the Sharing Community, located at 1 Hudson Street in downtown Yonkers.

In September 2014, The City issued a notice to the Sharing Community stating that they were operating illegally. They did not have a Certificate of Occupancy for the homeless shelter. The City further stated, “ the Sharing Community only had a Temporary Certificate of Occupancy (TCO) for its office space,” which had expired. The Sharing Community was using the basement of the church (St. John’s Episcopal Church) as a sleep in shelter in violation of the existing TCO.” The practice was stopped but the facility continues to operate a Department of Social Services licensed live in program for men which provides nineteen beds. The large facility also sponsors a soup kitchen and HIV counseling.

But for the many who previously benefited from the illegal operation, a former resident presents the following in a blog. Andsomearepushed (cinderquil964)

" Mrs. Lyons told me that when she asked if people could use the basement just for showers she was told that if she tried she would be issued a criminal summons. There is a shower in the residential program upstairs, and I do wonder why that hasn’t been used, however dss regulations probably prohibit this, as well as the fact that 120 or more people would have to share one shower if this were the case as I will explain I am far more angry that the city has a bathhouse that is refuses to allow the homeless to use, despite the fact that it is supposed to be open to the public. Ironically one of the biggest complaints I encountered from city figures was body odor, or lack of hygiene. The owner of Nawaab and the Yonkers ballroom told me one of the reasons he feels we scare his customers is our offensive body odors and sloppy way of dressing (he has pictures on his phone of us to “prove it”, and told me he has sent them to the city) Because the basement was closed."

The owner of Nawaab Restaurant, who the writer referenced, is one of many businessmen who view the downtown Yonkers homeless population as a nuisance . The Roosevelt Ballroom parking lot adjacent to Nawaab is a gathering spot for the homeless spillover from the Sharing community which sits directly across the street.

Not far from Nawaab, store owners had their businesses disrupted for three hours when a shelter resident threatened to jump from the roof of a building. In April of 2015, responders were called in after a man threatened to jump from a rooftop. Police say the man left the Sharing Community, and climbed onto rooftops of buildings directly behind the center. The man spent a majority of his time on the roof  behind Sam's Deli, between Hudson and Main streets off Getty Square. Yonkers police climbed up on the roof and negotiated with the man for about 2 1/2 hours. Eventually, he was removed without injury.

The boundary of the homeless spillover has extended across Riverdale Avenue to the Shoprite supermarket. In the Yelp review section, consumers offer the following commentary:

If you absolutely have to shop there do it before sundown, because im not kidding you once it gets dark all the crazies from Yonkers end up in that place and it turns into a Zoo smelling of weed, stale alcohol and urine.
I live right next to ot and shop at the one on Tuckahoe road.

You want to stay away from here, quite literally. Rough, aggressive crowd, nasty, rude and argumentative employees. We witnessed three fights on our second visit and while we only live less than a mile away, we won't be going back.  Lots of very rough people hang out here, NOT a supermarket to bring yourself, much less your family. (Jay N)

"I have to agree. The sharing community dishes out meals, but also a lot of stress to the area with their out of control patron. I am so upset to wait for the bus at Getty Square, and you see all these bums undressing in the square." anonymous

A larger concern is the presence of sex offenders that have listed 1 Hudson Street as their address. Within the last five years, according to public record, twelve level one and level two sex offenders have registered at 1 Hudson Street, although the sex offender registration law prevents offenders from living within 1,000 feet of a school. The residency requirement is waived for those not on parole or probation. The City Harvest Preschool, previously located at 44 Hudson Street was only steps away and the proximity was enough to raise eyebrows. Although statistics show that most sex offenders do not reoffend, there was still cause for concern.

In April of 2009, a 45-year-old homeless man was arrested at the Planet Fitness gym after hanging around the women's bathroom and locker room. Timothy Richardson was  identified as a Level 2 sex offender who had been convicted of first degree sexual abuse in 1995. He served time in state prison. He listed his address as 1 Hudson, at the Sharing Community.

A 28-year-old homeless man was arrested in 2012 and charged with raping an 18-year-old man at knifepoint in an alley in a west side industrial section of the city, police said.

Henry Goodwine, who told the police he lived at 1 Hudson St., the Sharing Community, was arrested a short time after the rape.

Goodwine raped the 18-year-old Yonkers man at 1 a.m. in an alley at 66 Alexander St., not far from the city jail, according to police. A short time after, the rape the victim reported it to the authorities. Police searched the area and found Goodwine at Riverdale Avenue and Main Street.

“We do not believe it was a random act,” said a police spokesperson.  Apparently, the  men knew each other.

Goodwine was charged with first-degree rape, a felony.

There have been other incidents. On February 18, 2010 a Yonkers Street Crime Unit  observed two males enter 72 Ash Street behind a woman who had just opened a locked front door of the building.  The officers approached the building and observed the males exit the building.  Upon questioning, both males could not provide a legitimate reason for entering the building and both were placed under arrest for trespassing.  A search of one of the suspects (later identified as Rafael Negron) revealed that he was in possession of a gravity knife. Both Negron and his partner, Jonathan Vasquez listed 1 Hudson Street as their address.

Other 1 Hudson St. offenders are still being sought. Yonkers police have issued a warrant for Tanya Melendez, wanted for second degree assault on June 8, 2014. They have posted the following advisory:

NOTICE: CONSIDER EXTREMELY DANGEROUS. TAKE NO ACTION TO APPREHEND THIS PERSON YOURSELF. REPORT ANY INFORMATION TO THE YONKERS POLICE (914) 377-7253 OR IF OBSERVED IN YONKERS DIAL911. OUTSIDE THE CITY OF YONKERS CALL THE LOCAL POLICE. 100% ANONYMOUS TIPS CAN ALSO BE SENT TO THE YPD BY TEXTING THE KEY WORD "YPD" PLUS YOUR TIP TO 847411.

In 2011, Lloyd Beard, a 43-year-old Yonkers resident of 1 Hudson Street, was arrested after he allegedly sold illegal drugs in New Rochelle on North Avenue Nov. 21, Winthrop Avenue June 3 and on Brook Street July 6. He was charged with three counts of criminal sale of a controlled substance, all felonies and three counts of criminal possession  of a controlled substance, one felony and two misdemeanors.

Crime and gentrification are reluctantly partnered in Yonkers.  Developers have converted 35 Hudson Street into a luxury loft condo building. Glossy brochures boast of stunning duplex apartments with river views.  Yet, the price tag of $219,000 has already been slashed to $200,000.

There are no easy solutions to the homeless problem in Yonkers.  But perhaps, The Greyston Foundation of Yonkers offers an example. Greyston  is a leading force in social enterprise in low-income communities, hiring the hard-to-employ while succeeding as a for-profit business with a double bottom line of profit and economic justice.

The original mission of the Bakery to provide jobs to homeless people was expanded through the 1980’s and 1990’s to encompass a number of initiatives designed to provide a holistic support network to families and individuals in Southwest Yonkers. Greyston pioneered the development of permanent housing for homeless families with support services, and went on to create 300 units of housing for homeless and low-income families in Westchester, with supportive services for those in need.