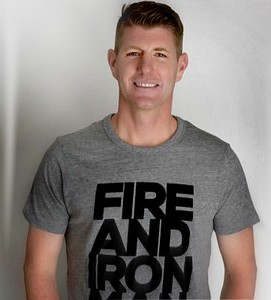 Yonkers, N.Y. – He’s a five-time Ironman finisher and a professional firefighter—and now, Kevin Duffy is one of two winners of PETA’s 2019 Sexiest Vegan Next Doorcontest. He beat out hundreds of other entrants from across the U.S. to nab the title, which comes with a free vacation for two to Hawaii, courtesy of Humane Travel.

After Duffy went vegan in 2015 to improve his health, he lost over 20 pounds, his skin cleared up, his energy was boosted, his workout recovery time improved, and he shaved a full hour off his Ironman time. He’s now a New York Times–profiled five-time Ironman, eight-time half-Ironman, and five-time marathon finisher whose example (along with the delicious vegan eats that he serves up at the firehouse) has inspired two of his fellow firefighters to go vegan, too. He credits his vegan food choices with not only making him better at his job but also helping to improve his mental health since his brother’s death on 9/11.

“Raising animals in horrific conditions, pumping them full of hormones, and selling their bodies as ‘food’ is a recipe for disaster,” says Duffy. “I believe that what we eat plays a huge role in how we feel and our outlook on life, and my health has improved 1,000% since I went vegan.”

“Kevin Duffy is an Ironman with a soft heart for animals,” says PETA Executive Vice President Tracy Reiman. “PETA encourages anyone who’s inspired by his compassion and his athletic prowess to give vibrant vegan meals a try for themselves.”

Virginia nurse and lifestyle blogger Jasmine Nakasone is this year’s other winner. PETA selected the winners based on several factors, including vote count. See the full contest details here.

PETA—whose motto reads, in part, that “animals are not ours to eat”—opposes speciesism, which is a human-supremacist worldview. For more information, please visit PETA.org.