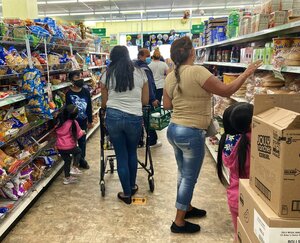 As of four weeks ago, Westchester County and NYC are seeing an uptick in corona virus cases. The increase is small but concerning.

Medical officials have predicted a second wave of the virus even when numbers were declining in late August. Lack of mask wearing enforcement and the re opening of schools  have contributed to the rise.

In addition, stores such as the Dollar Store located at 303 South Broadway are part of the problem. Long lines  began to appear weeks ago, when the Dollar store on downtown Main street closed for re hab. Bargain seekers flocked to the South Broadway store which boasts ample parking and easy access.

It was good for business but store management failed to increase the number of cashiers necessary to accommodate the overflow. It is the norm for customers to stand one half hour in line to make a purchase. Social distancing is rarely observed.  Shelves are blocked by that line which snakes around the aisles making it difficult for shoppers to access the merchandise. It creates a situation where shoppers must stand closely to people in line while perusing the shelves.

Managers state that the problem is with shoppers slowing down due to social distancing. However, a casual observation would show that shoppers to not adhere to the distancing guidelines and stand on average only three feet apart. On a given day, only two cashiers are in attendance.   An insufficient amount  to speed the line along at a reasonable pace.

The cumulative result is the perfect formula to spread the disease. The longer a shopper has to wait in line, the longer the exposure to infected persons. Without correction, the store will continue to serve as an incubator for the virus.