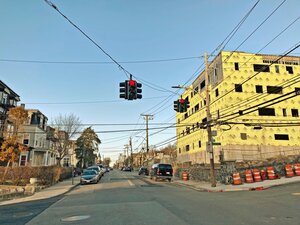 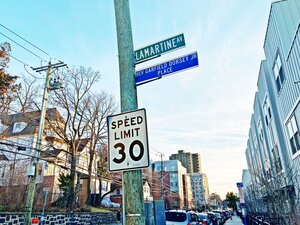 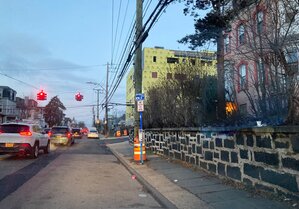 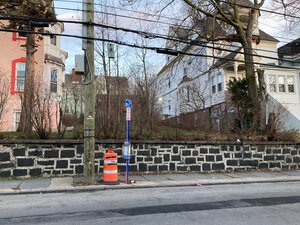 Warburton Avenue residents are seeing red about a traffic light change.  As a result, they are organizing and have started a petition.

Several weeks ago, the traffic light located at the intersection of Warburton and Lamartine Avenues was changed. The normal signal pattern of red, yellow and green was replaced with a steady blinking red light. This allows for traffic to pause briefly and then proceed. The pause is at the discretion of the driver instead of the mandated stop from a regulated signal.
At issue is the fact that the 30 miles per hour zone is frequently violated now.  Traffic lights between Point Street to Lamartine on Warburton are few. This is a distance of 0.4 miles and a two minute drive. Cars have been observed speeding on that stretch which jeopardizes the intersection.
To compound their frustration, the Bee line bus stop which was formerly located on the NE corner of Warburton and Lamartine, has been moved to the SE side of  Lamartine and Warburton.  That move has eliminated seven parking spaces on a block that was already lacking in parking spots.
According to Yonkers City officials, the bus stop was to be permanently relocated to the south side of Lamartine because it impeded the new driveway parking entrance under construction  at the Charter School of Excellence extension. The plan was approved by both the City and the County but was scheduled to be implemented at a later  time.
However, the contractor requested that the County move the bus stop sooner to enable it as part of the construction zone. Apparently, the City was never informed and residents were not advised of the change.

In addition, Warburton is a main thoroughfare to the down town area and is heavily traveled. A slowdown in traffic at the intersection would impact traffic in both directions.

One homeowner is directly affected by the change.  They state, "I can't even get into my driveway now. People have no place to park and are partially blocking it."  The homeowner is also angry that residents were left out of the loop in the decision.  "They never consulted us. I don't think this would have happened in more affluent neighborhoods in Yonkers."

Nevertheless, neighbors have vowed to fight the change. A petition campaign has been organized as well as other actions.