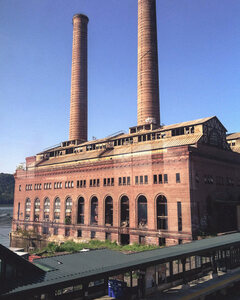 The disputed JFK Marina parking lot conversion has ended.  The developer of the Glenwood Power Plant, Lela Goren, has withdrawn the proposal to build a parking garage in the JFK Marina with rooftop recreation and green park features.

An assemblage of Yonkers community groups worked to prevent Goren, a private developer, from building a parking garage in JFK Marina. An online petition garnered over 1,300 signatures. The project's plan was to establish a home for climate solutions in Yonkers with green jobs, educational programs and a  partnership with local Groundwork Hudson Valley.

The coalition of community organizations does not want to see the City of Yonkers allow a private developer, for private benefit, to build a multi-story structure  in the middle of the community’s only waterfront park.  They support the redevelopment of the Glenwood Plant Project  The issue was the proposal of a garage on public parkland.

Plant greenhouses would provide free  organic produce to the community. But protesting groups claimed that it would come at a high price.  The 1,100 foot expanse is the sole remaining area of open public parkland along the Hudson River waterfront in Yonkers. The Hudson River view and the Palisades are considered to be one of the best in that corridor.

The summer season offers picnic facilities, sports, and fishing. In addition access to boats moored along the pier, it is a respite for locals that do not went to venture far away.

Despite the objections to the park, groups in support of the parking lot conversion were equally vocal. https://www.youtube.com/watch?v=ctR19l7HR64

For now, the issue of where to build a parking lot for the Glenwood Power Plant Project, remains in limbo.