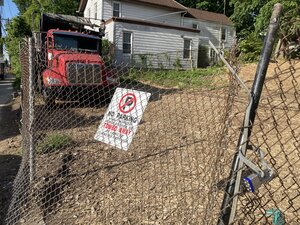 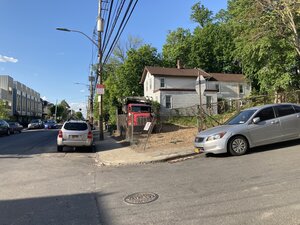 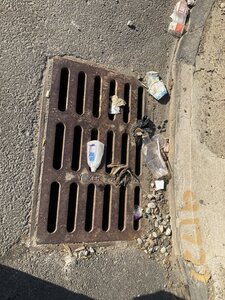 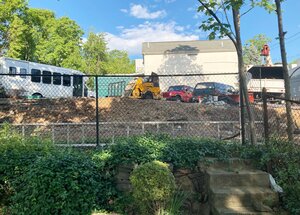 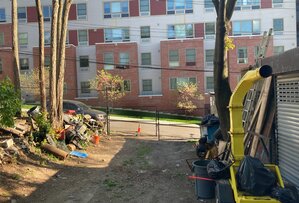 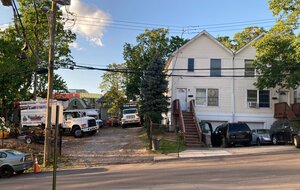 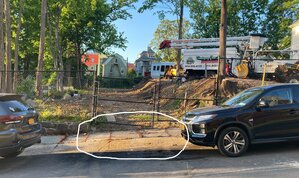 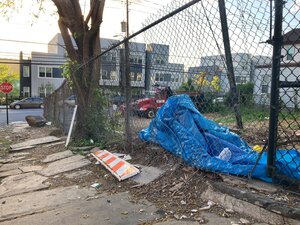 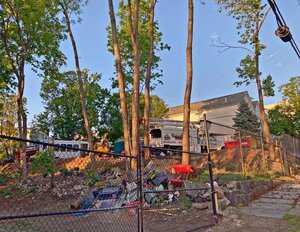 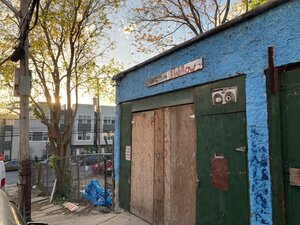 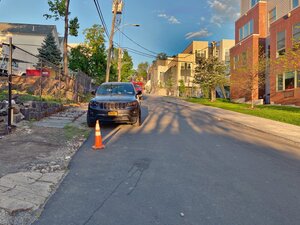 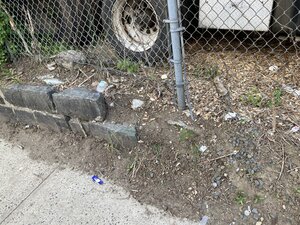 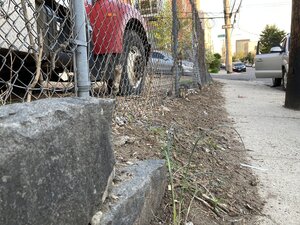 The home made parking lot at the corner of 1 Willow Pl. and Warburton Avenue has been vacated.  A lone diesel fueled truck remains as a reminder that the new lot owner still maintains dominance of that corner.

He created his own driveway with a lock and a wire fence that neatly rolls to the side allowing cars to enter via the sidewalk. There is neither a curb cut nor lowering of the sidewalk where pedestrians and school children pass. He has even posted his own official, yet ambiguous No Parking sign. It can be interpreted as dissuading motorists from parking on Warburton, blocking his illegal personal entrance. It should be noted that this is in violation of The City of  Yonkers street regulation where parking is actually legally allowed. It can also be seen as a veiled reference against parking in a lot that is already locked.

The sewer at the end of the sidewalk is already beginning to flood in heavy rain.  The small stone retaining wall, along with grass and trees which worked to stem the water flow was dismantled in the process of creating the DIY lot. This has the potential of flooding that section of Warburton, impeding traffic flow. This could slow down emergency service vehicles.

Although the Warburton lot may be on the road to recovery, the area behind it could pose even more problems.

A fleet of landscaping vehicles including heavy duty industrial equipment is parked next to several multiple family dwellings. Returning trucks idle for several minutes next to those houses, waiting to be admitted to the parking area. The diesel exhaust fumes hover in the air and eventually dissipate in the houses nearby.

"Smoke from diesel engines contains microscopic airborne
carbon particles that result from fuel combustion. The smoke from properly
maintained diesel engines should not be visible. Exhaust fumes that are thick
and black occur when diesel engines are poorly maintained or maintained
improperly. Particulate matter can damage the respiratory system."
In addition, the owner has created two additional driveways on the 1 Willow Pl. property for those trucks. Were those additions done with the supervision and permit process of  the City of Yonkers engineers?  Are large diesel trucks allowed to be stored on property designated as an M zone?
The entire process of clearing the lush tree filled lot has left a gaping, debris filled landscape. The previous greenfield has deteriorated into a toxic dump that grows larger each day.
Yonkers Mayor Mike Spano stated the following in April 2019.
“Throughout this spring and summer, we are taking direct action to restore the health and vibrancy of our neighborhoods,” said Mayor Spano. “Whether it’s beautifying a street, planting trees or encouraging greater recycling among our residents, we are continuing a partnership with our communities to improve our city and its image.”
Two years later, it is spring again. The sidewalk remains broken and unnavigable on Willow Pl. Several trees have been ripped up and the recyclables have been commissioned to the base of remaining, defoliated timber,  furthering their demise. A partnership with the new owner appears to be non existent. The image of 1 Willow Pl, is a bad one.
Contrast that image with the Charter School Extension which is under construction just one block away. The institution is a shining star in the midst of the Yonkers school system. Soon hundreds of eager students will pass through those streets with excitement and the expectation of a community that will provide for them. As a community member, 1 Willow Pl must come into compliance.