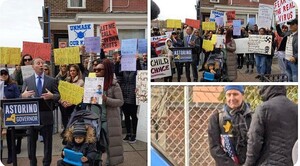 The rally took place outside the office of New York State Assemblyman, Jeff Dinowitz, a long established politician in the Riverdale, Bronx community.

Participants in the rally displayed swastikas and yellow Stars of David. The symbols are offensive reminders of the Holocaust. Although protestors claim that the symbols are meant to be analogous with the alleged oppression of the vaccine mandate, many deemed the signs as anti Semitic and condemned Astorino for allowing them. Dinowitz stated the following:

“The display of swastikas and yellow Stars of David outside my office today is repugnant and offensive,” Dinowitz tweeted Sunday. “People are perfectly free to express their opinion on vaccines or any issue, but to openly display Nazi symbols outside the office of a Jewish legislator is despicable.”  He also tweeted, "

·
Nov 14
Replying to
@JeffreyDinowitz
Rob Astorino stood right next to these anti-Semitic symbols and said NOTHING. All Republican leaders should condemn this unacceptable use of anti-Semitic imagery. I am sorry to any constituents who passed by this repugnant display outside of my office today
Astorino responded,  “I had no idea until I saw this photo,” wrote Astorino, a former Westchester county executive. “If I’d seen it I’d have told them to take sign down. No comparison to those atrocities & yes, I’ve always condemned anti-semitism.”
Several politicians condemned the display including New York State Attorney General, Leticia James. “These blatant displays of anti-Semitic hate are disgusting, and I stand with Jeffrey Dinowitz in rejecting this shameful, unacceptable behavior to the Jewish community.