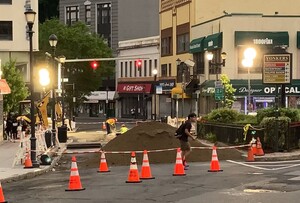 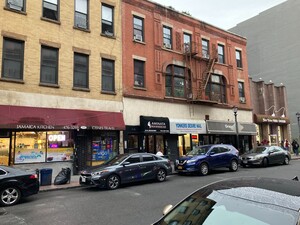 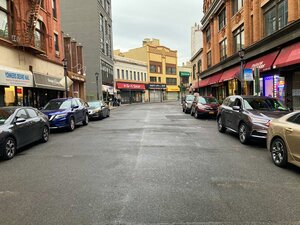 Yonkers is an old city with the equivalent infrastructure. As a result, repair and replacement is inevitable.

Getty Square has become a hub of evening excavation to replace old gas lines and enhance the  underground systems.

Work crews begin in the evening and labor late into the night. At issue is the impact on local merchants in that corridor that operate into the late nocturnal hours. The work has been ongoing for three weeks and businesses are losing money.

The approaches to N. Broadway from Getty Square are closed to traffic in the evening. Busses have been re routed and the businesses rely on the remnants of the foot traffic that was a by product of passengers debarking and embarking at the bus stops in that area.

In addition, stores have lost business from vehicle traffic which is now not allowed during those hours. Cars that would normally make a brief stop to pick up food have been prohibited from entering. Food establishments with car driven delivery service face a hardship.  Getty Square Liquors laments that they have steadily lost revenue for three weeks.

According to shop keepers, the North Broadway commercial sector between Manor House Sq. and Main Street is suffering. There has been no outreach from Yonkers BID, or their City Council District leader, Shanae Williams.

Although the stores affected represent a small portion of the total businesses on that block, it is still significant.

In a post pandemic recovery era, every penny counts. Lost revenue equals unsustainability. When a store closes, it is a blight that shows the fragility of the economic well being of a city. As the infrastructure work in Getty Square continues, store owners hope to find a solution.