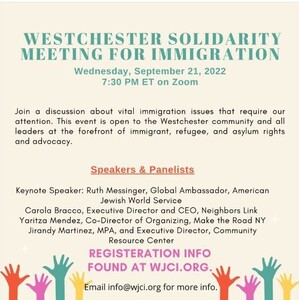 Democratic Chicago Mayor Lori Lightfoot, sparked outrage after deciding to move 64 migrants on a bus to the Windy City to a neighboring Republican suburb. Will New York City follow suit?

New York City is presently facing a crisis due to the daily transport of Central American migrants from the Texas border to northern sanctuary cities. The move came as a result of  Republican Texas governor Greg Abbott's frustration with the overwhelming flow of asylum seekers to the area. Abbott in turn has embarked on a mission to distribute those migrants to liberal Democratic sanctuary cities.

As a result, New York City, unprepared for the in flux,  is not only running out of space in local shelters, but may call for draconian budget cuts due to the unanticipated cost of housing, medical care and social services for the newly arrived. Those cuts include less garbage collection, school budget cuts and a strain on NYPD.

“We currently face new costs that will increase the city’s obligations by billions of dollars, including growing pension contributions, expiring labor contracts, and rising health care expenses,” Adams said Monday in a statement. “In response, we are asking every city agency to tighten its belt without laying off a single employee or reducing services.”

All agencies will be impacted, including the NYPD and the departments of correction and health.
That would mean an approximately $157 million cut to the New York City Police Department’s budget for the current year, and a $227 million reduction to the expected $4.8 billion in city spending in 2024. The calculations don’t include funding routed through the state or federal government." - NY 1
With no end in sight to the bussing, the costs will continue to spiral.
"Assuming that DHS has secured a similar rate this time around, providing the 5,800 hotel rooms could add an unexpected $312.6 million in new spending to the city budget — and that’s before tallying other costs, like providing food and medical care.
“Providing these services will clearly be a significant costs that will require city officials to either shift funding from other programs or identify savings,” said Ana Champeny, the top researcher at the Citizens Budget Commission."
But unlike the dismayed reaction of Craig Johnson, Mayor of the Chicago suburb, Elk Grove, the suburbs of nearby Westchester County have potentially rolled out a welcome mat to the asylum seekers.
In March 2018, Westchester County Executive George Latimer signed the Immigrant Protection Act into law.  The Westchester County Board of Legislators made a point of stating that this is not a sanctuary measure.
The bill defines what law enforcement can ask individuals about their citizenship status and how that information is shared with other levels of law enforcement. It  also prevents Westchester County from using its resources to assist in federal investigations based on  national origin.
In January 2017, Noam Bramson,  Mayor of New Rochelle stated:
"  The term “sanctuary city” has no precise definition, and we do not use it in New Rochelle, but we do make absolutely clear that all people of good will are welcomed, valued, and respected in our community, regardless of their origins, and that immigrants are an essential part of New Rochelle’s identity and future. "
The enthusiasm spread to other Westchester Towns in 2017. An activist in the Town of Irvington posted on social media:
"Team, great news from Irvington! The Irvington Board of Trustees has unanimously agreed to pass a set of sanctuary resolutions that will help make Irvington safe for undocumented immigrants! As of March 7, the Village of Irvington will no longer cooperate with federal immigration authorities. Irvington Police will not provide ICE with immigration information, will not question individuals about their immigration status, will not give ICE access to individuals in their custody, and will not honor ICE detainer orders" - Facebook
When it came to passage of the Immigration Protection Bill, Westchester County Legislator, Catherine Parker was strident in her quest to protect the undocumented.  In a Facebook post, she states:

It's working, my friends! Here's another update on the Immigration Protection Act.
Thanks to your support & pressure - we are making great progress toward passing our Immigrant Protection Act. Now is the time for a major push to get us over the finish line and pass this needed public safety bill. Contact the Board of Legislators, specifically those who represent districts which would be most impacted by this piece of legislation, and TELL THEM THEY MUST SUPPORT THE IPA on Monday, July 17th. We need to pass this with bi-partsian support to send a message to the County Executive that this is what the people of Westchester really want from their representatives.
We are showing just what can happen when we all ban together and demand action of our elected officials. Keep up the pressure!"

Fellow legislator Catherine Borgia, an Ossining Democrat a driving force behind the bill, said the bill was pro-public safety and didn't contradict any laws.

"This is a justice-for-all bill," she said. "A lot of the things that are provided in this piece of legislation are just a reaffirmation of the fact that the United States Constitution, and particularly the Bill of Rights, applies to every human soul on U.S. soil."- Lo Hud

The good will extends beyond local pols in Ossining.

Ossining for Refugees  partnered with Neighbors Link and Films on Purpose, a Pleasantville-based community organization that periodically holds film screenings related to social issues.
Russell said he sees the organization as an ongoing commitment and to continue even after most of the Afghan refugees have been settled. There are large groups of refugees from Congo, Myanmar, Ukraine, Venezuela and Syria.
“It is not for us to say where the next refugees will come from,” he said. “We will be happy to receive whoever they are.”-Lo Hud
Yonkers, which is the largest town in Westchester County is 35% Hispanic. Much of that population hails from Mexico and Guatemala. Third term Mayor, Michael Spano offers his support.
"Yonkers has always been a welcoming city for all of our people, including those who are documented and those who are undocumented," said Spano, adding the Yonkers police will only detain someone for federal authorities if there is an arrest warrant. "We do not arrest people based on immigration status. We arrest people based on crimes they commit. That's our policy. That's what we do."
Many Westchester towns responded to the plight of Afghan refugees. They were welcomed by several community groups in the River towns area as well as other parts of the county. Although there is a precise distinction between a refugee and and asylum seeker, those groups have embraced both.
Neighbors for Refugees has been at the forefront of the action. They were instrumental in implementing safe passage for Afghans both in Afghanistan and after they arrived in New York. They too are pro asylum seekers. neighborsforrefugees.org
PO Box 416, Larchmont, NY, United States, New York
This email address is being protected from spambots. You need JavaScript enabled to view it.
Space and money are running out in New York City for people fleeing persecution and seeking a better life. The Westchester  County suburbs could be their next stop.
https://sheltersforhomeless.com/assistance/westchester_ny.html
http://www.ifcany.org/emergency-housing
https://www.refugeesathome.org/how-it-works/
https://www.wjci.org/about