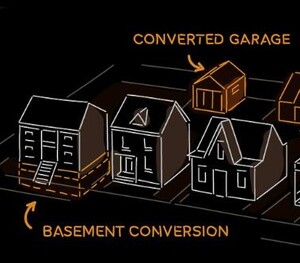 The shortage of affordable housing has reached peak proportions. The recent influx of undocumented migrants into the metro area and the lack of places for them to stay has highlighted the issue.

Senator Peter Harckham (D-Lewisboro), has proposed a bill to alleviate the housing crisis by allowing homeowners to convert garages and basement to legal living quarters. Additional sponsors of the bill are senators Biaggi, Comrie, Gounardes, Hinchey, May, Ramos and Salazar.

Senate Bill S4747A would  legalize basement apartments and garage conversions, sometimes known as granny flats, without regard to local zoning. It would permit homeowners to take out low cost loans to pay for the conversion. The bill is currently under review by the Senate Judiciary Committee.

“This legislation, which I introduced last year with Assembly member Harvey Epstein, will benefit our communities by providing seniors with added income to pay their bills and gray in place while also making affordable housing available to first responders, teachers, working families and young professionals.”

The bill however is not without criticism. Some Westchester towns, including North Castle have already voted down the plan. Sentiment in Yonkers is similar. The concern is that if the bill becomes law, the character and personality of Yonkers’ communities will be destroyed.

Yonkers’ streets are not equipped to accommodate the increased density. Parking is tight and fire trucks already have difficulties maneuvering in many neighborhoods. A larger capacity means more students in the already full to capacity Yonkers school system. Property values would decrease and  taxes would go up. The bill would also strip towns of the right to regulate their own zoning laws. Governor Hochul who initially gave the nod to the bill by incorporating it into her budget proposal, delivered a blow to New York housing advocates  when she sidelined it.

The fact remains that those proposed garage and basement conversions already exist, but illegally.  In most cases, these conversions involve the remodeling of detached garages into habitable floor space, often for rental purposes. Illegal basement apartments continue to flourish under the radar of watchful city inspectors. The problem is that many are dangerous and enforcement is lax.

Los Angeles, California had eight deaths in a three month period from illegal conversions of garages into bedrooms or apartments. Often improper electrical work is done, carbon monoxide fumes from water heaters or improperly installed heaters causes deaths, or wrong materials are used in the construction which are not fire safe.

The Department of Housing & Buildings is charged with the responsibility of protecting the health, safety and welfare of the public.  The Department issues building permits and inspects the work performed to insure that it is done correctly and that no injury will result to the occupant or the owner of the premises.

Yonkers Code requires that a work permit be displayed  in the window of a dwelling where a legitimate dwelling conversion is taking place.  If you do not see their permit displayed then just call the Department of Housing & Buildings at (914) 377-6500 and one of the staff can help to identify if they have a permit or take a complaint from you and have one of the Department's inspectors check into what they are doing.

If you suspect that the conversion is illegal, you can also report the owner to the IRS and the local zoning commission. However, any reward you get from the IRS will be based on the additional tax money that they receive.

But laws have limits. For many, the choice of living in an illegal basement or garage conversion is the only one affordable. For homeowners, it may be the means to pay escalating fuel costs.

Regardless of the arguments for or against conversion of auxiliary space into residential dwellings, all are in agreement on the single aspect of safety.