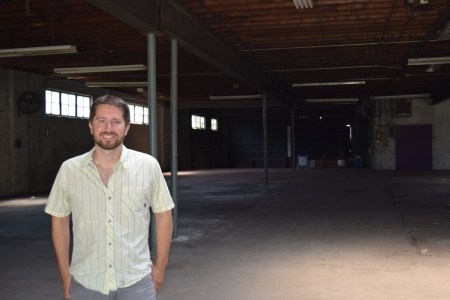 An abandoned industrial building on the changing downtown Yonkers riverfront could soon be converted to a 10,500-square-foot distribution and tasting room for the new Chicken Island Brewing.

The brewing startup, named for a long-vanished island on a paved-over stretch of the Saw Mill River in downtown Yonkers that was home to a chicken farm, closed on its $1.25 million purchase of 72 Alexander St. this month.

Co-owner and brewmaster Andy Fondak, a transplant from Watertown in upstate Jefferson County living in Croton-on-Hudson, said he hopes to have the former light industrial space converted into a brewery with 8,000 square feet of production and office space and a 2,500-square-foot tasting room and outdoor beer garden by next summer.

Chicken Island would operate as a family-owned brewery, with Fondak, his father Jeffrey and mother Dorothy as principals. Before coming to Westchester, Fondak left a job as an international sales manager and data analyst for a company in Watertown. His father, a dentist and Army veteran, retired recently after 13 years running a private dental office in Watertown. The younger Fondak also co-founded a craft beer bar in Jefferson County.

Both father and son trained to be certified master brewers through the World Beer Academy, a joint program between the Siebel Institute of Technology in Chicago and Doemans Academy in Munich.

After that training, they started coming up with recipes before looking for a location in the Hudson Valley to launch a brewery. Fondak still travels back to Watertown often to brainstorm recipes with his parents, who live there but are planning a move to Westchester.

“Because we didn’t have any ties to any specific area here, I was really looking for an area that clicked,” he said. “The demographics, the feel of it. Then we found (Yonkers) and thought, wow, well they are going to be building new apartments, it’s an area they are trying to revitalize, so it’s just a perfect storm for where a brewery can be.”

Fondak said the style of the 72 Alexander building will match up well with the modern industrial feel the brewery is going for. The facility will feature a malting room with an industrial mill for milling grain, a large mechanical room with brewing equipment and eventually a manufacturing line for canning. All equipment will be imported from the German brewing company Kaspar Schultz, the world’s oldest brewing manufacturer, Fondak said.

The main manufacturing room would be split from the tasting room with a glass wall so patrons can see the brewing process. A bay door opens on a small yard where Fondak plans to create a summer beer garden. The outdoor space is directly under Metro-North Railtroad tracks. It’s close enough that Fondak said he plans to hang the Chicken Island logo at train level to draw people getting off at the downtown Yonkers station about one-quarter mile from the brewery site.

The bar will offer 10 taps, with five beers that the Fondaks plan to distribute throughout Westchester County and eventually statewide and five rotating specialty beers available only in the tasting room. While the equipment is German and the Fondaks trained to become master brewers in Germany, Chicken Island’s brews will be more varied.

“They are grounded in German tradition but with an American twist,” Fondak said. “Americans like to use a lot more hop varieties, so actually Germany is playing catch-up to us in how wide and diverse our hops are.”

Fondak described his American Pale Ale, for example, as having notes of pineapple, strawberry, orange and other citrus flavors.

Fondak said the Alexander Street property qualifies for the state Department of Environmental Conservation’s brownfield cleanup program, which offers tax credits to private developers removing industrial contaminants from soil and water to clear properties for redevelopment. He estimated his family will invest between $4 and $5 million to renovate the building and launch the brewery.

In addition to the required environmental cleanup, the proposed brewery still needs final approval from the city. The Yonkers Industrial Developent Agency in December tentatively approved a $144,000 sales tax exemption on construction materials for the Chicken Island project, a $27,000 mortgage recording tax exemption and a temporary property tax abatement to be negotiated. The project is expected to initially create at least 20 jobs.

The brewery could be part of the next phase in the redevelopment of the postindustrial Yonkers waterfront. Lined with vacant and still-occupied factory and warehouse buildings and bus yards, Alexander Street is the focus of city planning for high-density, transit-oriented residential development mixed with retail and office uses to create what the city’s master plan for the area calls a “vibrant new waterfront neighborhood.”

The brewery will likely have some new neighbors as well. National real estate developer Avalon Bay Communities Inc. has proposed a mixed-use project with about 600 apartment units on several properties on Alexander Street. To the south of the brewery site, the two-story 10,800-square-foot former Yonkers City Jail at 24 Alexander St. was purchased two years ago by Daniel Wolf, a private Manhattan collector and dealer of art, photography and furniture and the husband of architect Maya Lin, for conversion to an art storage, exhibit and performance space.

Yonkers Mayor Mike Spano earlier this year said the Chicken Island Brewing project was “exactly what we hoped for in the downtown and waterfront.”

To Fondak, a brewery can be a perfect fit to lead the charge for redevelopment.

“Breweries have a history in many cities across the country of going into areas where it is ripe for development and bringing in new people,” he said. “People tend to follow breweries.”