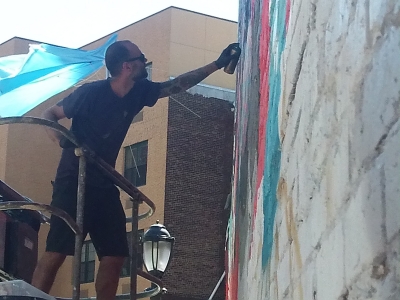 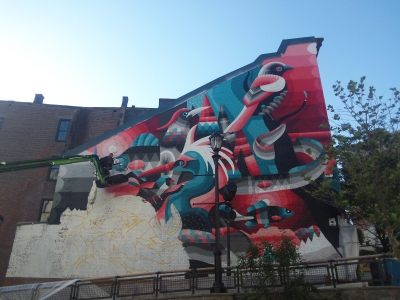 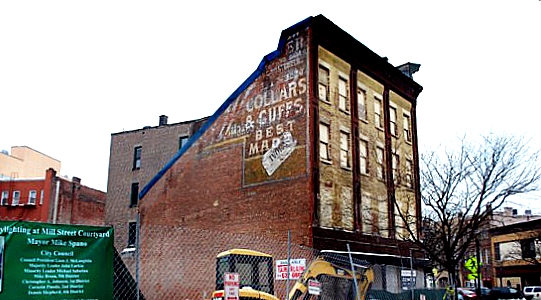 The City of Yonkers was settled by a young nobleman from Holland in July 1645. Adrian van der Donck was known in Dutch as a "younker" a.k.a., young nobleman. Three hundred years later, another Dutchman has come to town, not to settle it but to paint it.

Eelco van den Berg is a graffiti artist who lives in Holland. In 1986, he started to draw graffiti in his schoolbooks. He then stole his first spray can at his mother's friend's garage, and painted his name illegally on his neighbor's shed.  With his drawing experience, he was asked frequently to paint commissions for more character style pieces. His transition to wall murals began with a cat.

He made a sketch of a cat with the same feel of his graffiti fill-ins and painted it in a huge size on an illegal spot surrounded by homeless gypsies.  The Gypsies liked it, and invited him into their self-made tent homes and shared their homemade alcohol with him. His career took off from there.

Eventually, he landed in Bushwick where his murals were seen. He was asked to apply his skill to  the wall of a new park in Yonkers which is part of the Saw Mill River Daylight Pedestrian Mall.

The mural is bright, colorful and consistent with Eelco's passion for animals and wildlife. In the process, an old sign E.W. Collars was sacrificed.  However, the corner has been revived with honking  car horns, long gazes and broad smiles. All of which is a reaction to the new mural in town.

Check out the video: https://www.youtube.com/watch?v=xxf92LAcQrM