Yonkers Sidewalks Are Home to Homeless 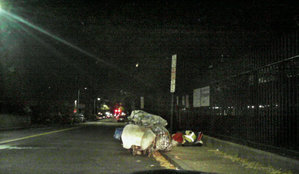 As temperatures drop and winter sets in, the homeless set out.  Once again, the downtown area of Yonkers is home to the homeless. Many chose  to sleep outside.

While The Sharing Community operates 3 Emergency Shelters in Yonkers, some homeless remain on the streets. Their outdoor encampments are not only a traffic hazard but a sidewalk obstruction that blocks pedestrians.

Warburton Ave., the gateway to downtown Yonkers, is a frequent location of can recyclers who eventually end up sleeping on the sidewalk. Left unchecked, it will  only proliferate creating a burden for sanitation workers and the general public.

The homeless deserve the dignity of a clean bed and a warm meal. In January of 2016, Gov. Cuomo made the round up of homeless people mandatory by law.

Citing the risks of hypothermia and possible death, Cuomo now requires communities  to take the homeless who live outside to shelters when the mercury hits the freezing mark.

If they refuse to go, the order,  calls for the involuntary taking of the homeless to those shelters

“We’re in a period now of the winter inclement weather,” said Cuomo “It’s dangerous for homeless people to be on the streets.”