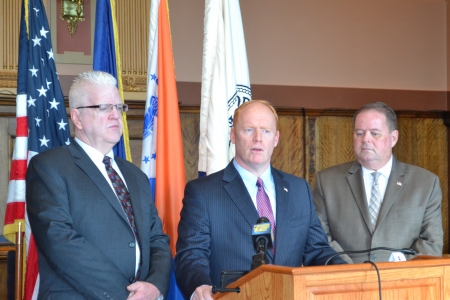 YONKERS, NY – A Supreme Court Judge has ruled that the City of Yonkers is now a plaintiff in the landmark case, New Yorkers for Students’ Educational Rights (NYSER) v. State of New York. The decision was rendered months after the City Council voted to intervene in the action on behalf of the plaintiffs, students who have been denied the opportunity for a “sound basic education” by Albany‘s systematic underfunding of schools.

Yonkers officials detailed the new developments in the case at a press conference on Wednesday at City Hill.

“The children of Yonkers are finally getting their day in court after years of being systematically underfunded by Albany,” Council President Liam McLaughlin said. “Today’s decision is groundbreaking, and we are the first municipality that has been allowed to intervene in a lawsuit like this. We are confident that Courts will continue to agree with our arguments that Yonkers is not receiving its fair share of school aid from Albany.”

Along with NYSER, fifteen parents from across the State filed the original action that Yonkers officially joined as a co-plaintiff today. Gretchen Mullins Kim is an attorney, Yonkers resident and one of the co-plaintiffs in the original lawsuit, on behalf of her children Theodore, a student at Yonkers Middle-High School, and Enzo, a student at PEARLS.

“Too many of our kids have been disappointed by Albany’s failure to meet its constitutional obligation to provide our children a sound, basic education,” she said. “We could no longer afford to wait for Albany, and legal action was our only recourse. The courts have agreed today that this case must be heard.”

The court also denied the State’s motion to dismiss the suit, which was brought by the same noted education attorneys that argued the successful Campaign for Fiscal Equity (CFE) lawsuits. The NYSER lawsuit argues the State has failed to comply with the Court of Appeals decisions in the CFE cases.

Majority Leader John Larkin said, “This suit seeks to overturn the Gap Elimination Adjustment, or GEA, which has starved our schools. The Judge found that Yonkers could join the suit mainly because the City has a proprietary interest in the school funds specifically set aside under the Budget and Reform Act of 2007, which has not been repealed or amended. The subsequent removal of these pre-designated funds, pursuant to GEA, could be found to impair our proprietary interest, giving us legal standing to join this case.”

Minority Leader Michael Sabatino said, “Yonkers, a high-needs district, has seen funding cuts at the State level that have led to a loss of 600 teachers in recent years, while enrollment increased by over 3,000. During the City of Yonkers budget hearings in May, the Yonkers Public Schools Superintendent conceded that City students are not receiving the funding necessary to provide a sound basic education. This lawsuit will finally address these inequities.”

Council member Corazon Pineda said, “Yonkers has stated a basis to intervene in this case and there are questions of law and fact that deserve to be heard with those of the other plaintiffs. The courts agree, and now as co-plaintiffs, these questions will be heard. We hope the answer is that our schools will receive the recurring additional funding our students are entitled to under the State Constitution.”

Council member Mike Breen said, “This is a landmark decision which validates what Yonkers officials have been saying for years, our schools are being systematically and intentionally underfunded by unfair funding formulas from Albany. Even our so-called increases are taken back through the Gap Elimination Adjustment. Today’s decision opens the floodgates for municipalities to challenge Albany’s arbitrary and capricious scheme to underfund schools.”

Council member Dennis Shepherd said, “When the Council voted in May to intervene in this lawsuit, the Albany powerbrokers laughed and thought we would never be successful. Today was a wake-up call to the status quo. There are very serious legal questions about why $110 million of our school money is being held in escrow by Albany, and we hope the resolution will be having our money returned to us.”