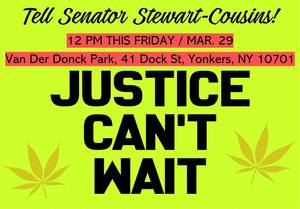 A coalition of local criminal justice reform minded groups are on for a flash demo at Andrea Stewart-Cousins office in Yonkers this Friday! They feel that the Senator has not taken the social, racial, and economic justice issues facing her constituents seriously enough and want to let her know that we expect more from our elected officials.

When: This Friday, March 29 at 12 noon
Where: Van Der Donck Park, 41 Dock St, Yonkers, NY 10701
Next to the Yonkers Public Library, across from the Senator's office