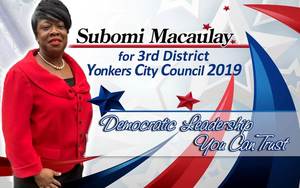 A Funny Thing Happened on the Way to the Forums

On June 14, 2019, The Westchester Black Women’s Political Caucus Yonkers Chapter, Community Voices Heard and League of Women Voters of the Rivertowns sponsored a forum at the Yonkers Riverfront Library to meet all 2019 Yonkers Democratic Party primary candidates, in preparation for the primary election that will take place on Tuesday, June 25th.

The most significant incident of the evening was Mayor Mike Spano’s failure to attend, the second forum in a row where he was a no-show. The mayor’s absence is disturbing since he is running on his self-proclaimed outstanding record with support so monumental that he felt compelled to change the law so he could run for a third term. The other two mayoral candidates, Karen Beltran and Ivy Reeves, both did an admirable job and deserved the opportunity to counter the Mayor.

At the forum on Wednesday May 29, at the Chema Center, sponsored by the Hudson River Community Association, the Ludlow Park Residents Association and the Park Hill Residents Association, organizers arranged the timeline to accommodate Mayor Spano who had a personal event that evening. But eventually an aide showed up, to say the Mayor wouldn’t be coming, after all. The aide then asked to read a prepared statement. Got that?! Read a prepared statement from the Mayor who had said he was coming. The aide was perturbed when his request to read the statement was denied.

The Riverfront Library forum was moderated by Karen Schatzel. Unfortunately, Ms. Schatzel’s skills as a moderator leave much to be desired. Her presentation style is painfully slow as is her ability to handle an unexpected snag. She put County Legislator candidate Luz Casanova at a disadvantage by asking her every question first, thereby giving Jose Alvarado a chance to parrot her answers and then repeat over and over that he has the support of Ken Jenkins.

When the Casanova/Alvarado segment was over, I told a forum aide that Schatzel should have alternated candidates each time she asked a new question. The aide conveyed that to Schatzel, who acknowledged the mistake (too late for Casanova) and said she would correct it, while admitting she has a hard time keeping track. She subsequently messed up the order, again.

The biggest drawback of the forum was the lack of time allotted to each candidate for specific exposition and rebuttal. The questions were too general and almost every candidate gave non-specific replies that provided little information to the attendees. The lack of time also meant that audience questions were severely limited. A much better format would have been to ask   candidates what legislation they would champion and how, specifically, it would be implemented. And of course, asking candidates what differentiates them from their opponents should be a given and it wasn’t.

Some Highlights and Lowlights of the Forum:

Karen Beltran and Ivy Reeves both displayed a sense of living in the real Yonkers – not the Yonkers where having a father in politics is the usual path to office. It was another reminder that the Mayor missing an event like this is a disservice to his constituents.

Missing from Jose Alvarado’s lapel was a plaque stating that Ken Jenkins, former Yonkers Democratic Party Chair, supports him. I am not even sure why Alvarado thinks this is a badge of honor. You may recall that at the 2017 Westchester County Democratic Party Convention, George Latimer won the vote of a majority of Yonkers District Leaders. When asked why district leaders didn’t vote for their former party chair, most answered the same way: we know Ken.

Luz Casanova did not do her homework at all. She should have pointed out that Alvarado lost this same position because his constituents were so dissatisfied with him. Nor did she ask whether he would actually show up for the job. Remember when Alvarado was appointed Yonkers City Clerk? He never showed up for the job and was dismissed. He garnered $32,297.47 in wages and $6,077.08 in benefits for a job he did not do.

City Councilwoman Shanae Williams (1st District) proved she could speak louder and faster than anyone there. Plus, she set the record for speaking longest past her allotted time. Her attempt to explain away her vote to extend term limits without constituent support was convoluted and beyond my ability to comprehend. Shanae is competent, personable and could be a good politician if she learns to put her constituents needs first.

Terence Miller missed a golden opportunity. He should have started by stating that although Shanae is the incumbent, it was he who received the Democratic Party’s endorsement because Shanae’s own district leaders saw that she wasn’t representing her district’s needs. He failed to mention that Shanae is not running for RE-election, as she has stated, but was appointed to her current office by Mayor Spano, to fill a vacancy.

The best discussion of the evening was between Olasubomi Macaulay and Dennis Robertson for City Council 3rd District. Macaulay was passionate and displayed detailed knowledge of the housing situation in Yonkers. Robertson, who is always gracious, said that he would tell the truth even when it isn’t what people want to hear. And that if he won, he would consult with Macaulay on housing issues.

Macaulay should have pointed out that Robertson is against women’s choice, against increasing affordable housing minimums and rarely says anything about the enormous tax breaks developers get in Yonkers. She should have asked him – what makes you a Democrat?

I want to extend a big THANK YOU to the organizations that sponsored this and other forums. Nothing is more important that hearing one’s representative speak and having the opportunity to ask him/her questions. My own community organization (Colonial Heights Association of Taxpayers) runs social events but never allows its members to ask questions of their representatives.