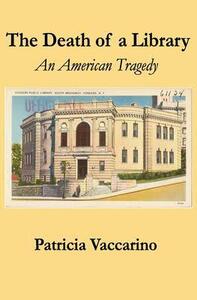 Patricia Vaccarino  is an American writer. She has published three novels and three nonfiction books.  Ms. Vaccarino grew up in Yonkers, New York.

At fourteen she began writing a novel about Yonkers that eventually became her first literary work, YONKERS Yonkers!: A story of race and redemption  Her first Yonkers book is about growing up in Yonkers during the 1960s and 1970s. The Heart of Yonkers was published April 2, 2020.

Her latest book, Death of a Library, is a passionate yet scathing expose of the demise of the Yonkers Carnegie Library. Steeped in political intrigue and back room deals, the library met it's end before a suitable case for it's redemption could be established. An excerpt from the book reads as follows:

"The Yonkers Carnegie Library was commonly held to be the most beautiful building in the city. No one seemed to know for sure why it was destroyed.

The circumstances that led to the death of the library are steeped in half-truths, incredible lies, and wild rumors that range from political corruption to bumbling incompetence. One rumor focuses on the true intentions of the Mayor of the time, Angelo Martinelli, and his desire to undo the white flight to the east side of Yonkers. Rumors hinting of racism—the area surrounding the library had become increasingly populated with blacks and Puerto Ricans—is also explored as a reason why the library was destroyed.

Corruption in Yonkers city government has also been alleged, and while without having a smoking gun, it’s hard to prove people took money under the table, the chronic pattern of cronyism is undeniable. Among the rumor mill, claims persist that Angelo Martinelli wanted to build a sleek high-rise tower to replace both the Yonkers City Hall and the library. Other rumors suggest the library was razed to make room for a bridge to New Jersey.

Another allegation accuses Yonkers City Council Member Harry Oxman of sacrificing the library to spare his small-time dry cleaning business. And finally, the library itself has been accused of being its own worst enemy. What really happened?"

Patricia will be a guest on Monday, June 21st, 2021 from 3-4pm on Westchester Eye on the Radio. Tune into WVOX 1460AM or listen online at wvox.com.