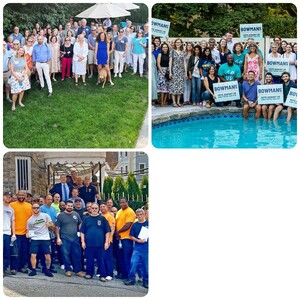 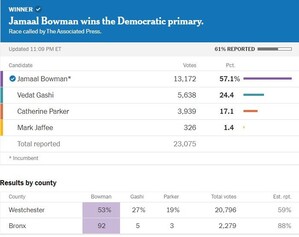 Westchester County Legislator, Vedat Gashi, is a first time candidate in a major political race. The lawyer, born in Kosovo, is an immigrant with a strong urban experience and street smart savvy. Gashi grew up in the Bronx, experienced the ravages of poverty, and rose to the political arena through hard work and the perspective of a Democratic moderate.

Although he lost the race, Gashi has made enough successful inroads amongst voters to position himself for future political contests. His outreach to blue collar workers and the minority community will work to build his support base. His moderate platform is sufficient to appease those who feel that the Democratic party has swung too far to the left. In addition, his policies are broad and fill several voids left by Bowman from his first term.

Catherine Parker has lost on her second attempt at the office. Parker previously challenged Bowman in his first bid for congress in 2020. But Parker, a Westchester County Legislator also, was undeterred. Her second attempt at the office was guided by Amy Siskind, a wealthy American activist and writer. Siskind, a Westchester resident, is a champion of a progressive wing of the Democratic party largely associated with White feminists. Parker. a recipient of their largesse, disassociated from the Black and Latino community during the campaign. Her campaign focused primarily on climate change and flood mitigation in Mamaroneck and Larchmont. Due to the fact that District 16 is 56% minority majority, it was a gamble that lost.

Unless she changes strategy, her political future will be relegated to the confines of a few square miles in Rye.

Jamaal Bowman now has a second shot at "getting it right" with his constituency. District 16 no longer contains some of the most impoverished neighborhoods in the Bronx. The purge has given way to affluent towns in the northern regions of Westchester County. Places with yacht clubs and ladies who lunch. And there are the police that Bowman voted to defund. Yet even though it seems to be a strange land for the Democrat Squad member to represent, a landslide number of voters felt that they were willing to take the chance.