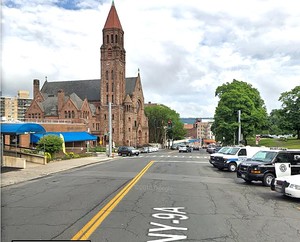 A man was shot and killed today in front of St. Joseph's Hospital located at. 127 South Broadway. The hospital is located directly across the street from Yonkers Police headquarters at 104 S. Broadway, Yonkers, NY.

Yonkers, NY - On Tuesday, January 29th, 2019, at approximately 3:09 PM, members of the Yonkers Police Department responded to the area of South Broadway at Vark Street on reports of shots fired; at the same time, two victims with apparent gunshot injuries arrived at Saint Joseph's Hospital; one of the victims, a 17-year old male resident of Yonkers, subsequently died from his injuries. Officers have cordoned off the area and initiated a criminal investigation.

Detectives from the Major Case Squad and Crime Scene Unit have responded to the scene and are actively investigating this incident at this time, interviewing subjects and witnesses, reviewing surveillance video, and processing forensic and ballistic evidence. The second victim is listed in stable condition. As this investigation is in its preliminary stages, no additional information will be released at this time. The City of Yonkers and Yonkers Police Department offers its condolences to the family of the victim.

Anyone with information regarding this incident is encouraged to contact the Yonkers Police Detective Division at (914) 377-7724 - all calls will remain confidential. 100% anonymous tips can be sent by texting the key word YPD plus the tip to 847411. Anonymous tips can also be sent to us directly through the Yonkers PD Tips app which can be downloaded for free to any Apple or Android device.