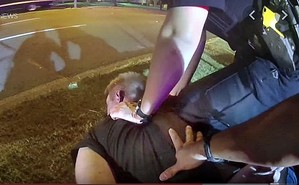 Tony Timpa was killed by police in Dallas, Texas. In 2016, his death was ruled a homicide and nothing has been done about it.

Timpa initially called police because he had stopped taking his meds for schizophrenia and was having a psychotic episode.

Police arrived, handcuffed him and applied the same restraining hold that killed George Floyd for thirteen minutes. Less than one half hour later, Timpa was dead.

Attempts to obtain the body cam video were stalled. Finally, the attorney for his family was able to obtain it. Despite the graphic nature of the incident, charges against the cops involved were dropped.

Geoff Henley, attorney for the family, will be the guest tomorrow, June 15th, 2020, on Westchester Eye on the Radio from 3-4pm. The show can be heard and seen on Facebook at https://www.facebook.com/RedBlueTalk/

Video of the incident can be seen at this link. https://www.youtube.com/watch?v=_c-E_i8Q5G0