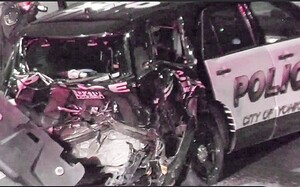 Yonkers Police were involved in an incident that has led to a serious injury of a YPD sergeant.  The YPD statement reads as follows:

"YONKERS POLICE: “This morning at approximately 2:07 AM an unmarked Yonkers Police unit was working a crime suppression detail in the area of Central Park Avenue in response to recent commercial burglaries which include local car dealerships.

They observed a white Honda Pilot loitering in the area which appeared to be casing commercial locations; the Honda Pilot then drove southbound on Central Park Avenue passing several red lights.

Officers checked the license plates which were reported stolen.

The unmarked unit with the assistance of marked units attempted to pull over the Honda Pilot but they refused to stop and instead fled southbound on Central Park Avenue at a high rate of speed.

Yonkers Police pursued the Honda Pilot, which was discovered to be stolen from a dealership on Long Island, on to the southbound New York State Thruway. On the Thruway, the Honda Pilot collided – rear-ended – with a marked Yonkers Police unit driven by a police sergeant.

Both vehicles were disabled on the Thruway; the occupants of the Honda Pilot fled on foot on the southbound service road and the police sergeant required extrication – he was transported to a local area trauma center with serious but non-life-threatening injuries.

The Thruway was temporarily shut down but is now reopen.

Police and Detectives are actively investigating this incident working to develop information, identify and apprehend the suspects. No other injuries have been reported.

Additional information may be released as it becomes available"