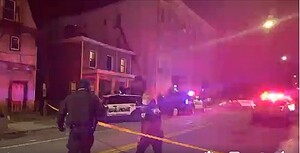 A man has been fatally shot at 157 Warburton Avenue near Ashburton at 9pm.  It is unknown if the shooting occurred outisde of the house. The man was found inside.

Police searched for for a white BMW series 5 connected to the shooting. That vehicle was located in Mt. Vernon but the suspect is still being sought.