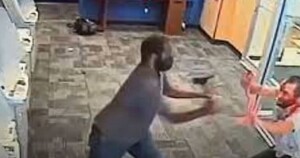 A Yonkers man has been arrested for attempted murder. On Wednesday, the police arrested Aaron Garcia of Yonkers, N.Y., as the suspect in the attack, charging him with attempted murder and assault.

Garcia entered a Chase Bank on Broadway near Beaver Street in Manhattan, on the night of August 15th, 2021.  He then proceeded to viciously attack a 51 year old man in the ATM vestibule.

The man was struck on the head and thigh as he was standing in front of a cash machine.  He then smashed several A.T.M. screens, dropped the hatchet and walked away.

The bloody life and death struggle was captured on surveillance video. The victim is recovering in the hospital.