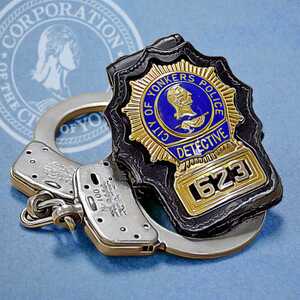 *** NEWS RELEASE *** Yonkers Police make arrest in fatal hit-and-run accident of local high school student. Yonkers, NY – On Wednesday, August 3rd, 2022, at approximately 12:20 AM, members of the Yonkers Police Department responded to the 600 block of McLean Avenue on a report of a scooter operator having been struck by a vehicle. Upon arrival First Responders located a male youth down on the ground with severe head injuries; he was transported to a local area trauma center in critical condition. The vehicle that struck the youth fled the scene. Police cordoned off the area and initiated accident and criminal investigations.

Detectives from the Major Case Squad and Crime Scene Unit, and accident investigators from the Traffic Unit, responded to the scene and interviewed subjects and witnesses, recovered surveillance video, processed forensic evidence, and reconstructed the accident dynamics. Investigation yielded that the youth, a 16-year-old resident of Yonkers, was operating an electric scooter west on McLean Avenue in the eastbound lane; when, opposite the shopping center at 660 McLean Avenue, just east of Cricklewood North, he was struck head-on by a cargo van traveling east in the eastbound lane; the van then fled the scene and a witness called 9-1-1.

Over the next 36 hours detectives worked to successfully locate the van and identify the operator; he was placed into custody without incident and the vehicle, a 2004 Chevrolet Express, was impounded as evidence. The operator is identified as Stephen DOLAN, a 46-year-old resident of Yonkers and City of Yonkers Department of Public Works employee. Investigators believe that DOLAN was consuming alcohol before the accident and was under the influence of intoxicants.

The victim, identified as Christopher Jack “CJ” Hackett, passed away yesterday morning in the presence of family; he was a student at Archbishop Stepinac High School in White Plains.

Mayor Mike Spano stated, “Our hearts go out to Christopher Hackett’s family and to his friends. This young man’s life was tragically and senselessly cut short. As for the accused driver, who is a City employee, the Police Department is conducting a full and fair investigation so that the District Attorney can hold him fully accountable under the law.”

Police Commissioner Christopher Sapienza stated, “The Yonkers Police Department extends its deepest sympathies to the family and friends of Christopher Hackett; there are no words that can assuage the grief of losing a child. Our investigation has led to the identity and arrest of the accused driver who must now face the consequences of his actions in a court of law.”

Stephen DOLAN was arrested and booked on the charge of Leaving the Scene of a Motor Vehicle Accident – Injury Resulting in Death, a Class D Felony in the New York State Vehicle and Traffic Law; he was lodged overnight in the Yonkers City Jail and is expected to be arraigned today in Yonkers Criminal Court; additional crimes may be charged as the investigation is enhanced. The case is being prosecuted by the Westchester County District Attorney’s Office.

The City of Yonkers and Yonkers Police Department offer their sincere condolences to the family and friends of Christopher Hackett and his school community.

NOTE: Booking charges are merely accusations and the defendant(s) are presumed innocent unless and until proven guilty in a court of law. ###