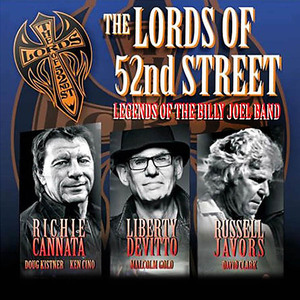 The Lords of 52nd Street are Billy Joel’s original band… and they are coming back, by popular demand, for The Milford Performance Center on October 8th! Lords of 52nd Street is the name Billy Joel gave to the band back in the 70’s. They do not need to copy or reinvent the original music… since they are the guys you saw playing at Madison Square Garden, Carnegie Hall, Nassau Coliseum and the countless other venues during those Billy Joel concerts of the 1970’s and 1980’s. THIS IS NOT A TRIBUTE BAND!

There is also a limited Meet & Greet before the show with only 25 tickets available on a first come first serve basis. All shows at MPC help multiple local Charities. This show helps 2 different causes... The Or Shalom Men's Club & The Charitable Hands Foundation.

Doors open at 6:30 PM & the Show Starts at 7:30PM. Refreshments, wine and beer is available. Tickets are available online at www.MilfordPerformanceCenter.org or at the door on show day.