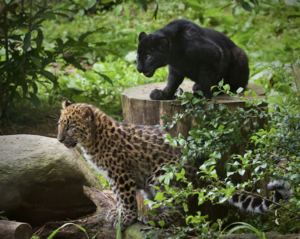 BRIDGEPORT, Conn. –— Two of the rarest (and littlest) of the big cats on earth are ready to make their debut at Connecticut’s Beardsley Zoo! The Zoo’s six-year-old Amur leopard (Panthera pardus orientalis), Freya, gave birth to three cubs on January 25, 2019 with two cubs surviving.  The surviving cubs, a male and a female, have been hand-reared by animal care professionals in the Animal Health Care Center. The male, Orion, and the melanistic (an extremely rare black color variant) female, Kallisto, have slowly been acclimating to their new habitat, and are ready to meet the public.

“We’ve worked with the cubs for the past few weeks, gradually acclimating them to the outdoors, their new surroundings, and the sounds, sights, and smells they’ve encountered for the first time,” said the Zoo’s Deputy Director Don Goff, who as exotic cat expert and co-chair of the Association of Zoos and Aquariums (AZA)’s Felid Taxon Advisory Group (TAG) has overseen the care of the cubs from birth. “Our guests and supporters have anxiously awaited a chance to meet Orion and Kallisto, and we appreciate everyone’s patience. As always, the physical, emotional and mental welfare of the cubs is our first responsibility.”

The cubs will be out in their habitat from 9:00 to 11:00 a.m. and then again from 2:00 to 4:00 p.m. each day, but Goff cautioned that the cubs will have free choice to their holding areas, and they may choose to go inside where they can’t be seen. “We want everyone to have a chance to visit these precious and rare leopards, but they’re still quite young and may need rest time out of sight of our guests,” he explained. “If they’re not visible from the viewing window, visit other parts of the Zoo and make another trip to the leopard habitat at a later time,” he advised.

To make room for the cubs, the Zoo said goodbye to adult male Amur leopard, Sochi, as he moved to a new permanent home. The cubs’ mother, Freya, is still at the Zoo. Managed by the Association of Zoos and Aquariums (AZA)’s Species Survival Plan (SSP), inter-regional transfers like Sochi’s are arranged with careful attention to gene diversity in the hope that additional successful breeding will take place to boost population numbers. Sochi and Freya’s offspring, Orion and Kallisto, will remain at the Zoo for the near future.

Once the cubs are permanently housed in the public habitat, the nursery webcam will no longer livestream their daily activities. The Natt Family Red Panda Habitat’s webcam will continue to operate every day from 8:30 a.m.to 6:00 p.m. The Red panda webcam can be accessed through the Zoo’s website: www.beardsleyzoo.org.

A rare subspecies of leopard that has adapted to life in the temperate forests from Northeast China to the Korean peninsula and the Russian Far East, Amur leopards are often illegally hunted for their beautiful spotted fur. The Amur leopard is agile and fast, running at speeds up to 37 miles per hour. Males reach weights of 110 pounds and females up to 90 pounds.

They prey on sika, roe deer, and hare, but the Amur leopard has to compete with humans for these animals. They live for 10-15 years in the wild, and up to 20 years in human care. In the wild, Amur leopards make their home in the Amur-Heilong, a region that contains one of the most biologically diverse temperate forests in the world, vast steppe grasslands, and the unbroken taiga biome.