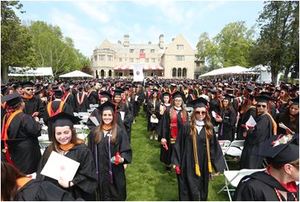 Chris Lowney, co-founder of Jesuit Commons, and vice-chair of the board of common spirit Health, was a recipient of a Doctor of Laws honorary degree and the undergraduate speaker. Lowney inspired graduates to model cura personalis, or care of the whole person, a Jesuit value instilled in them at Fairfield, and pointed to how their Jesuit education offers an advantage in navigating a complex world. “Fairfield has equipped you to discern the way forward, both for your own lives, in our companies, and for our confused society.”

Lowney urged graduates to seize “leadership opportunity” every day and consider how they will influence others—by their example of how they treat the marginalized, whether they strive to use their talents well, and whether they behave with integrity. He challenged the class of 2019 to transform themselves, constantly, in a complex and ambiguous world. “We all have to keep asking ourselves: ‘Who should I be in this world? What should I be doing? And what is worth doing and having?’ You will answer such questions well if you remind yourself every day that life has given you an opportunity to point out the way and have influence in a world that badly needs leadership from principled women and men.”

William Atwell, P’08 was awarded an honorary Doctor of Lawsdegree during the undergraduate commencement ceremony.As a member and chair of Fairfield’s Board of Trustees, Atwell has served the Fairfield University community for more than 12 years. He is currently managing director of Atwell Partners, LLC, a financial consulting firm, following his retirement as president of Cigna International. Marna Borgstrom also received a Doctor of Laws degree.Borgstrom ispresident and CEO of Yale New Haven Health System and Yale New Haven Hospital. In 2017, Modern Healthcare named Borgstrom among the “Top 100 Most Influential People in Healthcare.”

Elisa Castelli was awarded the Undergraduate Loyola Medal for her commitment to high academic standards and community service.

Lisa Angell was the class of 2019 undergraduate commencement speaker. Her speech echoed the theme of cura personalisand Fairfield’s mission of educating the whole person, body, mind and spirit in the Jesuit tradition. “We view the world differently now because of the core curriculum.” She added, “By gaining perspective across every subject, we can connect the arts, literature, history, sociology, communication, business, math, science, religion and yes, even philosophy.”

At the graduate ceremony, Bill Shore, founder of Share Our Strength and former Congressional appointee to the National Commission on Hunger, received a Doctor of Laws degree and was the graduate commencement speaker. Shore spoke about sharing one’s strengths, bearing witness, and personal transformation in the context of social change. “Bearing witness makes us complicit. What we’ve seen can’t be unseen—and we are left with a profound choice: do something or do nothing.” Shore cautioned that, “the time we’re allotted to solve problems is limited and precious. Don’t wait until the mortgage is paid, or until you get the promotion, or until it stops raining.”

Hector M. Sanchez, the principal of Cesar Batalla School in Bridgeport, Conn., also received a Doctor of Laws degree at the graduate commencement exercises. Sanchez has made it a priority to forge a relationship with Fairfield University’s Graduate School of Education and Allied Professions, and the Center for Faith and Public Life. The Student Teacher Empowerment Partnership (STEP) has grown from this collaboration, focusing on improving literacy among Bridgeport school children, while providing learning opportunities for aspiring teachers in the University’s graduate teaching program.

The Graduate Loyola Medal was awarded to Kacper Laska ‘18, M’19, who received his Master of Science degree in Mechanical Engineering. Laska, who plans to pursue a career in the engineering fields of robotics and prosthetics, designated the $1,000 Loyola Medal monetary award to the school’s 3D Printing Club, which he helped to found.

In concluding remarks, Fairfield University President Mark R. Nemec, PhD asked graduates to “carry forward the Ignatian tradition of the magis, seeking more from yourselves from your colleagues and from the world.”