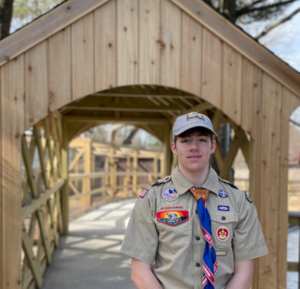 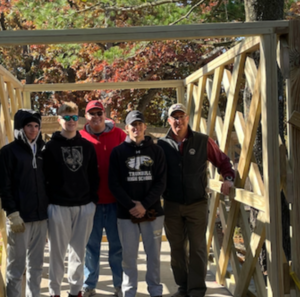 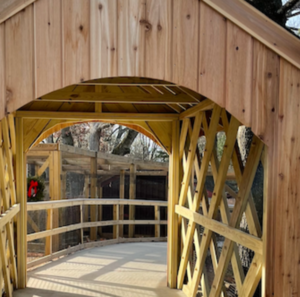 The New England Farmyard at Connecticut’s Beardsley Zoo has a new covered bridge over the duck pond, thanks to Trumbull Eagle Scout Luke Strong. A junior at Trumbull High School, Strong has been coming to the Zoo since he was a small child, and he explained that he was looking for a way to give something back to the place he loved. With a future career in mind as an architect, he envisioned a covered bridge over the waterway that’s home to a large variety of ducks and geese. “I thought it would be a good challenge,” he said, planning the bridge as his Eagle Scout Service Project.

An Eagle Scout Service Project, or Eagle Project, is an opportunity to demonstrate leadership while creating a project for the benefit of the community. The project is the culmination of Boy Scout training, and it must represent a significant effort on the part of the Scout. As a non-profit 501 c (3) organization, the Zoo qualified for the project. Strong raised roughly $2,000 on a GoFundMe page to begin work, with the Zoo contributing funds as well.

“I worked with an engineer, Kevin Chamberlain. First, we worked together to design the bridge, then I made a materials list. Mike Robinson from Carpenters Union Local 326 helped, along with three additional union carpenters. We also had help from some scouts from my troop,” said Strong. The Zoo’s Associate Curator Rob Tomas also helped with planning and construction, Strong said.

It took almost a full year from conception of the idea in winter 2021 to designing the bridge in summer 2021. Building commenced in November.

“I’m very happy with it, and I’m very proud,” Strong said. “I’d been picturing it in my head for so long!”

“We’re extremely pleased with the way the bridge turned out,” said Tomas. “It adds the right touch of historic New England charm to the Farmyard. Every aspect of the project went very smoothly, and it’s a well-planned and well-built bridge.”

Strong not only has achieved his Eagle Scout rank, he also is part of the Bridgeport Regional Aquaculture Science and Technology Education Center, following the Technical Engineering path offered there. He’s currently at work on his next project, building a paddleboard as part of his Marine Construction classwork.

The Zoo’s New England Farmyard showcases heritage breed animals, domestic species that are in danger of disappearing from the landscape. Rare farm animals represent an irreplaceable piece of earth’s biodiversity, just like their wild cousins, and offer variety that may be needed in the future: robust health, mothering instincts, foraging, and the ability to thrive in a changing climate.  The Farmyard includes newly built barns, pastures, and enclosures for goats, cows, miniature horses, Guinea hogs, chickens, geese, and ducks.