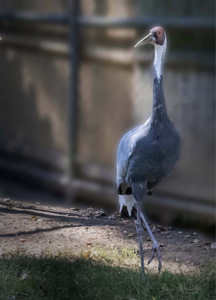 BRIDGEPORT, Conn. – Connecticut’s Beardsley Zoo is the new home for a White-naped crane (Antigone vipio). The male crane, named McDuffy, arrived from Turtleback Zoo in New Jersey several weeks ago, and after a quarantine period (required for all new arrivals), has taken up residence in a large grassy habitat located next to the Natt Family Red Panda Habitat.

White-naped cranes are an elegant species native to northern Mongolia, southern Siberia, Korea, Japan and central China.  They have a white nape and vertical gray stripes on their necks, as well as a distinct red patch surrounding their eyes. They are found in in grassy marshes, wet sedge meadows and reedbeds in broad river valleys, lake depressions and boggy upland wetlands. They prefer areas where their nests can be concealed and there is little grazing pressure.

Habitat destruction of wetlands due to agricultural expansion, as well as hunting, pose the most critical threat to their survival. This species is classified as Vulnerable, facing a high risk of extinction in the wild. Since 1994, AZA institutions have been sending surplus White-naped crane eggs to Russia to be reared and released to the wild. Currently, the International Crane Foundation is also involved in the conservation of White-naped cranes throughout their range in eastern Asia.

“McDuffy is a beautiful new addition and contributes to the Zoo’s demonstration of the rich biodiversity in nature,” said Gregg Dancho, zoo director. “We continually look for new and unusual species to educate and delight our guests, that also meet our mission of wildlife conservation.”