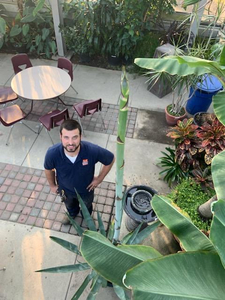 BRIDGEPORT, Conn. – Looking like a giant asparagus spear, flower stalks have appeared in the center of two different Agave plants, each colloquially known as a “Century plant” for the decades it requires to reproduce. One of the two has rapidly grown to more than nine feet; the second is more than seven feet. Adding approximately three inches every day, soon the spears will be brushing the high ceilings of the Victorian Greenhouse, where the last Century plant bloomed in 2003.

The approximately 80-year-old Agave was donated to the Zoo in 1956 by a New Haven pharmacy that was razed for construction of the Connecticut Turnpike. Sixty-four years later, this plant has finally produced a thick flower spike with several side shoots. In its native habitat in the hot, dry American southwest, these spikes can grow to heights up to thirty feet, unfettered by ceilings and roofs. Horticulture Manager Jonathan Dancho says that in the Greenhouse, he will have to tip the base of the taller flower stalk soon to allow it to grow along the rafters, where it will produce hundreds of golden blooms.

Century plant is a bit of a misnomer, as it could take about 30 years for the plant to reach maturity in its native habitat. There are two different types of Century plants ready to bloom in the Greenhouse, according to Dancho. He estimates that the first of the plants will bloom in February or March, followed by the second, larger plant blooming in March or April. The Greenhouse has several more Agaves that are years away from producing a flower.

The Century plant has a wide base of gray-green sword like leaves, which in some cultures, historically have been used as weapons. The leaves are most commonly edged with thorns and end at the tip with a needle-like spike. For years, the plant quietly stores up energy for its final reproductive effort. Once the current pair of plants bloom, probably in two to three months, the base of the plants will die, having fulfilled its purpose.

The agave is not an unusual plant in Mexico, Arizona, Nevada, New Mexico and southern California, where it thrives in hot, dry summers. But it is unusual to grow agaves to this size and it takes years longer to reach the fruition of their reproduction cycle in the cold northeast.

“We haven’t seen a Century plant bloom at the Zoo in 17 years, and it’s unclear if or when we’ll see one again,” said Dancho. “There are some oddities of nature that are dazzling simply by taking so long to flower. The Century plant is one of them.” He added that it may take longer for plants in a northerly location to bloom, based on the amount of ambient light accessible to them.

Most likely an Agave americana, the horticultural staff at the Zoo has not been able to discern the precise subspecies in the Greenhouse collection. There are about 22 genera and 720 species of agave plants with spiny leaves.

One of the Zoo’s missions is to serve as a botanical garden for the community, demonstrating the relationship between plants, animals, and humans. The historical Victorian Greenhouse houses hundreds of beautiful, unusual or even endangered plants, along with a Koi pond. Zoo volunteers help to maintain the plants, adding signage that is a helpful benefit to home gardeners, garden clubs, and houseplant enthusiasts.