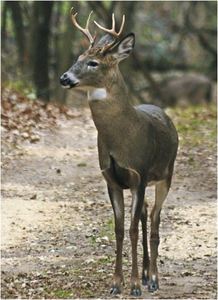 The Connecticut Department of Energy and Environmental Protection (DEEP) and AAA remind motorists to be watchful of increased deer and moose activity along roadways, especially during early morning and evening hours.

DEEP’s Wildlife Division says motorists should be aware of and heed "Deer Crossing" signs along state highways. Motorists are advised to slow down and drive defensively should a deer or moose be spotted on or by the road. Because moose are darker in color and stand much higher than deer, observing reflective eye-shine from headlights is infrequent and, when struck, moose often end up impacting the windshield of vehicles. All moose and deer vehicle collisions should be reported to local, state, or DEEP Environmental Conservation Police Officers (860-424-3333).

According to the DEEP, there were more than 4,000 deer strikes in Connecticut last year, though most go unreported.

"During 2017, approximately 4,122 deer were killed in the state due to collisions with vehicles, which is down considerably from 10 years ago," said Andrew LaBonte, Deer Program Biologist for the DEEP Wildlife Division. "While the number of collisions has fallen over the past 10 years motorists should remain vigilant this time of year as to the presence of deer near roadways."

"Hitting a deer can be costly, even fatal" says Amy Parmenter, spokesperson for AAA in Greater Hartford. "According to UConn Crash Data, deer strikes resulted in a driver’s death last year and the year before."

According to the latest DEEP data Glastonbury had the greatest number of reported deer strikes.

"The fact that the greatest number of reported deer strikes was in Glastonbury clearly illustrates that where deer and drivers intersect, there’s a greater risk to both", Parmenter says.

In the event of a collision with an animal, AAA recommends:

· Following the collision, call the police.

· Avoid making contact with the deer/animal. A frightened or wounded animal can hurt you or further injure itself.

· Put the vehicle’s hazard lights on; whether it’s light or dark outside.

· If possible, immediately move the vehicle to a safe location, out of the roadway, and wait for help to arrive. Your safety and the safety of your passengers is most important.

· Contact your insurance agent or company representative as quickly as possible to report any damage to your car. Collision with a deer or other animals is covered under the comprehensive portion of your automobile policy.

AAA has some tips to help prevent a crash or to reduce damage from an animal collision:

· Pay attention to road signs. Yellow, diamond-shaped signs with an image of a deer indicate areas with high levels of deer activity.

· Keep your eyes moving back and forth. Continuously sweep your eyes across the road in front of you for signs of animals and movement. Animals may also be alongside the road, so make sure to look to the right and left, as well. While the most likely crash is you hitting an animal, on occasion they might also hit you by running into the side of your car.

· Be especially attentive in early morning and evening hours. Many animals, especially deer, are most active from 5-8 a.m. and 5-8 p.m. – prime commuting times for many people.

· Use high beams when there’s no oncoming traffic. You can spot animals sooner. Sometimes the light reflecting off their eyes will reveal their location.

· Slow down, and watch for other deer to appear. Deer rarely travel alone, so if you see one, there are likely to be more nearby.

· One long blast. A long blast on your horn may frighten animals away from your vehicle.

· Resist the urge to swerve: Instead, stay in your lane with both hands firmly on the wheel. Swerving away from animals can confuse them so they don’t know which way to run. It can also put you in the path of oncoming vehicles or cause you to crash into something like a lamppost or a tree.

· If the crash is imminent take your foot off the brake: during hard braking the front end of your vehicle is pulled downward which can cause the animal to travel up over the hood towards your windshield. Letting off the brake can protect drivers from windshield strikes because the animal is more likely to be pushed to one side of the vehicle or over the top of the vehicle.

· Always wear a seatbelt. The chances of getting injured when hitting an animal are much higher if you don’t have your seatbelt on. Also never drive drunk, distracted or drowsy.

While rare, moose strikes do occasionally occur in Connecticut, and because of their size can result in significant damage to a vehicle.

Most of Connecticut is not considered ideal habitat for moose because the state’s landscape is fragmented, roadways have high traffic volume, and moose have large home ranges (approximately 10-15 square miles). Moose venturing into southern Connecticut, with high population density, road networks, and traffic volumes, pose an increased potential for human fatalities from accidents as compared to deer-vehicle accidents. Residents throughout the state are encouraged to report moose sightings on the DEEP website at www.ct.gov/deep/wildlife.