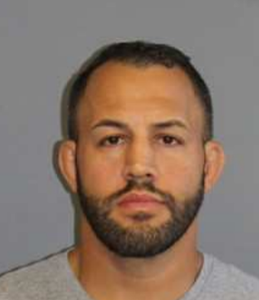 During the investigation, it was determined that on (2) different occasions (03/17/2017 and 04/24/2017) Gonzalez illegally utilized Trumbull Police Department’s NCIC (National Crime Index Computer) computer to search for addresses and vehicles listed to the complainant of the sexual assault.

Although the statute of limitations had expired for Inappropriate Sexual Contact, (Sexual Assault in the Fourth Degree) an arrest warrant was applied for Gonzalez for the commission of the crime of (2 counts of Computer Crime in the Third Degree, in violation of Connecticut General Statute, 53a-245. On 06/24/2019, Gonzalez’s arrest warrant was issued by the Bridgeport Superior Court On 06/27/2019, at approximately 9:47 am, Gonzalez voluntarily surrendered himself at CSP-Troop F, Westbrook, where his arrest warrant was executed.

Gonzalez was released on a court-ordered $75,000.00 bond and will be arraigned at the Bridgeport Superior Court on 07/11/2019. No further arrests are anticipated.