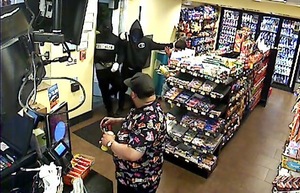 Connecticut State Police is seeking the help of the public to identify two men who robbed a rest stop at gunpoint this morning.

At approximately 4:15 a.m. on August 6, 2019, two black males entered the building at the rest area on Route 15 southbound in Orange. Both suspects were armed and displayed weapons. The suspects were wearing black hoodies (with the hoods pulled over their heads) and white gloves. The suspects left the area in a red, coupe-style Honda.

State Troopers responded to the scene and Central District Major Crime detectives are conducting an investigation into the robbery.

Anyone with any information on the suspects is asked to contact State Police at Troop I at 203-393-4200.