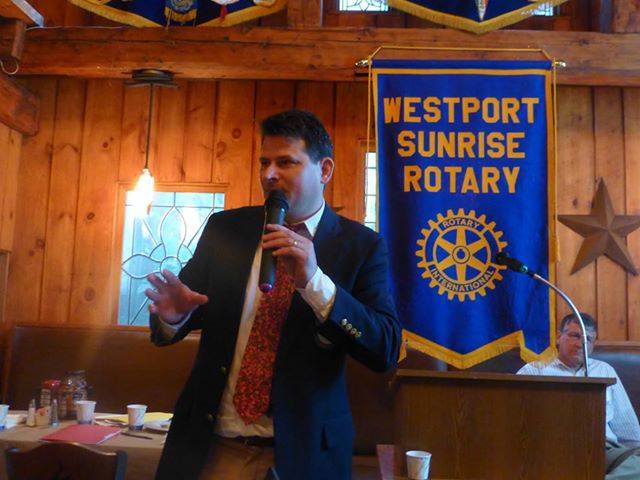 That depends, according to Geoffrey Feinberg. The Research Director at the Yale Project on Climate Change Communication (YPCCC), a unit of Yale's School of Forestry and Environment Studies, addressed Westport Sunrise Rotary on Friday.

Feinberg’s group is a non-partisan research organization that studies public knowledge of climate science and shares its findings in order to help Americans understand the causes and potential impacts of global warming.

While the facts say global warming is a real and ongoing phenomenon – “97 percent of climate scientists say that human caused global warming is happening,” Feinberg said and added that man made greenhouse gases – largely Carbon Dioxide (CO2) – “have begun to really pollute our atmosphere.”

But the issue is that “climate change is a very difficult subject (and) scientists aren't always the best communicators.” Further, what you believe about global warming may well be a function of some of your other beliefs.

Feinberg said the 63 percent of Americans believe “global warming is happening.” Only 16 percent do not. Interestingly, he pointed out, 70 percent said it was one year ago, but “we had this really lousy winter.”

Yet there is, he said, “definitely confusion among the American public about what causes climate change.” Only 49 percent believe it is “human caused,” while one-third “think it's mostly by natural causes.”

Feinberg stated that the earth’s temperature “was really pretty stable over many thousands of years, then suddenly, since the Industrial Revolution began in the mid-19th century CO2 has been polluting the atmosphere” in a manner that “corresponds exactly to the amount of CO2 that's been pumped into the air.”

Because one of YPCCC’s goals is raising the level of knowledge about global warming one of its important tasks is understanding what Americans believe so the Center can develop appropriate educational messages for each.

To that end, the center has defined “Global Warming’s Six Americas,” and, Feinberg said, created a different message for each.

At one end of the continuum are the Alarmed – “16 percent of the population who are absolutely convinced this is happening. They recycle religiously, own hybrid cars. They’re organized, and they donate money.” The Alarmed are mostly college educated middle-aged women. The second America is the Concerned, about 25 percent, “who are also persuaded global warming is real, that we need to do something about it, but they are not as involved as the Alarmed. They look like the average American and are more egalitarian and more moderate politically.”

The Cautious – 25 percent—“think global warming is a problem but are not as firm in their beliefs and don't feel it's a proximate personal threat. They are not really engaged in their communities and tend hold more traditional religious beliefs” than those in the first two groups. The Disengaged account for five percent of our population, they are less focused on the issue and say they could change their minds. They are demographically similar to the Cautious but are “kind of checked out, not paying much attention to the issue and don't know much about it. They don't really care.”

The Doubtful are 15 percent of our population, “those who think it's happening and those who don't, they don't necessarily think it's human caused but more attributable to changes in the natural environment. They tend to be older, better educated white men who hold individualistic values.”

The Dismissives – 13 percent – are the “opposite of the Alarmed, absolutely certain that climate change is not happening, they are engaged, but on the other side, and strongly oppose a policy response. They tend to be male, hold traditional religious beliefs, and reject most government intervention.”

Feinberg stressed “that each of these people must be talked to in very different ways.”

The difficulty, he added is that “Unfortunately, it has become a partisan issue - though it doesn't have to be. Republicans, Independents and Democrats alike, to different degrees, all would like to see us move away from using fossil fuels and toward renewable energy,” some for environmental reasons, others because investing in the latter will be a job and wealth creator.

The issue became politicized in the animus built up toward Al Gore in the aftermath of the 2000 election, followed by Gore’s 2006 movie, An Inconvenient Truth, a documentary about the “severity of the climate crisis.”

One potential source of the reaction to Gore, to the movie, and to the idea of human caused global warming is that the arguments the Dismissives – and others who do not buy into the man made, fossil fuel driven explanation – tend to respond to scientists working for think tanks funded by oil companies and people who have interests in fossil fuels.

Those interested in learning more about climate change, about Global Warming’s Six Americas and the YPCCC can click on this link: http://environment.yale.edu/climate-communication/.