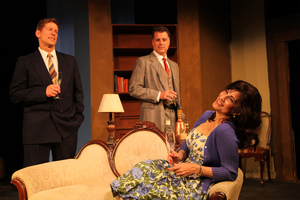 Westport Community Theatre is proud to announce their production of the exciting melodrama Dial M for Murder by Frederick Knott.

The WCT cast of many veteran actors includes Deborah Burke, Tim Cronin, Phil Lorenzo, Tom Petrone, David Pollard and Frank Speranzo. Performances take place from June 7th through June 23rd, on Fridays and Saturdays at 8:00 p.m. and at 2:00 p.m. on Sundays, with a Thursday performance on June 13th at 8:00 p.m. Carole Claps directs the play, which is produced by Rachel Konstantin.

In Dial M for Murder, Tony Wendice has married his wife Margot for her money and plans to murder her for the same reason. He blackmails a scoundrel into strangling her and arranges a brilliant alibi for himself. Following unforeseen events, the story culminates into almost unbearable suspense, guaranteed to keep audiences on the edge of their seats. Dial M for Murder had a highly successful run on Broadway and the road. "…Original and remarkably good theatre—quiet in style but tingling with excitement underneath," said The New York Times about the show.

Many members of the WCT production have extensive experience both on the stage and behind the curtain. In addition tomultiple professional acting credits, director Carole Claps has numerous directing credits that include Darien’s Got Talent, the Darien Art Center’s popular fundraiser, and The Music Man, South Pacific, La Cage aux Folles and The Man Who Came to Dinner at Curtain Call.

Deborah Burke, who plays Margot Wendice, has been seen on the WCT stage in The Diary of Anne Frank, London Suite, I’m Not Rappaport and The Prisoner of Second Avenue, and in multiple productions with Curtain Call, the Darien Arts Center and Town Players of New Canaan. She has also been producer, set decorator and costumer for many community theatre shows.

Tom Petrone last appeared on the WCT stage in Shakespeare in Hollywood, Watch on the Rhine and Diary of Anne Frank, and is Lesgate in this current WCT production. His credits include productions at Curtain Call, Carriage House and Town Players of New Canaan, in addition to horror films Playing Hooky, Catatonia, and soon to be filmed, Sugar.

Phil Lorenzo who plays Tony Wendice, has been performing in community theatre for over 30 years. Recent productions at WCT include Yankee Tavern, And Then There Were None and Light Up the Sky. He also appeared in New Canaan’s production of Born Yesterday, where he was nominated for Best Supporting Actor by CTOnstage.

Tim Cronin (Inspector Hubbard) has performed in Driving Miss Daisy and Enter Laughing in Westport, in addition to, Rumors, Moon Over Buffalo, Moonlight and Magnolias and Fiddler on the Roof.

Dial M for Murder is produced by arrangement with Dramatists Play Service. Tickets are $25 ($23 for seniors and $15 for students) and can be purchased at westportcommunitytheatre.com or by calling (203) 226-1983. Westport Community Theatre is located at the Westport Town Hall, 110 Myrtle Avenue.