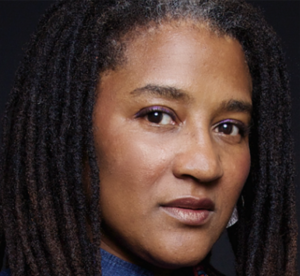 Westport, CT - “A Conversation with Lynn Nottage,” two-time Pulitzer Prize-winning playwright, will be hosted by Westport Country Playhouse on Sunday, September 29, at 4 p.m., in the Playhouse’s Jason Robards Theatre. The free-of-charge event is in advance of the Playhouse staging of Nottage’s play, “Mlima’s Tale,” October 1 – 19, directed by Mark Lamos, Playhouse artistic director, who will facilitate the conversation.  The Westport production is the first since the play’s world premiere at The Public Theater in 2018.

Nottage and Lamos will discuss “Mlima’s Tale,” the playwright’s career, and her body of work in the hourlong program. “A Conversation with Lynn Nottage” is free-of-charge by reservation and open to the public.  To reserve tickets, contact the Playhouse box office at 203-227-4177 or by email at This email address is being protected from spambots. You need JavaScript enabled to view it. .  Up to four tickets may be reserved with each reservation.

“Mlima’s Tale” is about a magnificent and beloved Kenyan elephant named Mlima hunted for his coveted ivory tusks. As traffickers maneuver the illicit ivory market, from Kenya to Vietnam to China, the animal’s invincible spirit follows their path of desire, greed, crime, and corruption.

“Mlima’s Tale,” according to Lamos, “speaks to us, the human community, about our treatment of sensitive and sentient animal communities torn apart by men. As these animal communities disappear from the face of the earth, the art of live theater can truly connect us to them, to their spirits, and to the people propelled by poverty and capitalism who benefit from their slaughter.”