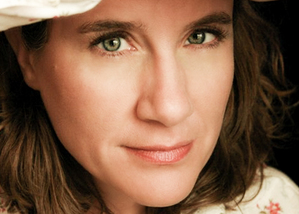 Celebrated as a charismatic performer, she’s known above all for challenging herself to conquer new styles, almost like mountaintops, every few years.

For the Voices Café audience that will mean musically evocative “paintings” from her 2017 Cuban flavored collection “An American In Havana” and, from her most recent album appropriately titled “NOLA- Susan Werner Goes to New Orleans”. When she plays you can literally close your eyes and see the images that inspire her music.

It’s no surprise that The Chicago Tribune wrote that she is, “One of the most innovative songwriters working today.”

She’s no stranger to National Public Radio dubbed by NPR as the “Empress of the Unexpected,” she’s performed on NPR World Café three times and Mountain Stage nine times. In August 2016 Nebraska Educational Television broadcasted a one hour special on Werner, agriculture, and her 2015 concert tour across the state, “The Land Will Outlive Us All”.

After over a dozen albums singer-songwriter Werner has confirmed her reputation as an artist as changeable as the weather and in a good way, as she has the ability to effortlessly slide between folk, jazz, pop, gospel, Tin Pan Alley, chamber music, and Americana all delivered with sassy wit and classic Midwest charm.

She likes concept albums, “because they provide a place for the audience and the artist to meet.  You may not know me and I may not know you, but we both know something about a farmer’s market, about what it is to sit in a pew at church and wonder what life means, we both know something about falling in love and maybe falling back out again. I like to have a starting point for an evening’s conversation with an audience – it’s a great icebreaker.”

At age five, Werner made her debut, playing guitar and singing at St. Mary’s Catholic Church in Manchester, Iowa and it’s been music ever since.

She learned both piano and guitar by ear and after earning a degree in voice from the University of Iowa attended Temple University in Philadelphia, performing in numerous recitals and operas while completing her graduate studies.

On occasion Werner, who calls Chicago home now, still closes any one of the 125 club dates she plays annually throughout the US and Canada with “Un Bel Di” from Madame Butterfly or “Habanera” from Carmen, but ultimately, she opted to forgo a career as an opera singer, dedicating herself to songwriting instead, building a reputation at jazz clubs, coffeehouses, and folk festivals along the Eastern Seaboard.

She first arrived on the national stage when her 1995 BMG/Private Music debut earned her national concert tours with Joan Armatrading and Richard Thompson and her songs have been recorded by Tom Jones, Michael Feinstein, Broadway stars Betty Buckley and Christine Ebersole, and countless individuals and ensembles.   But Werner says she’s just getting started: “I’ve always wanted to go to Scotland – hey, maybe I could learn the bagpipes.  It’s not impossible….is it?”

Seating at Voices Cafe is cabaret style (at tables) and table reservations (minimum 4 people) are accepted by contacting David Vita, This email address is being protected from spambots. You need JavaScript enabled to view it. or calling 203.227.7205 x14. Purchase $27 tickets at https://voicescafe.org/show/susan-werner-2/. Doors open at 7:30.