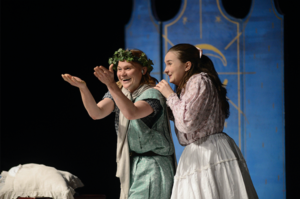 The production is based on John Caird and Trevor Nunn’s 1982 adaptation, originally developed for London’s Royal Shakespeare Company, based on the original play by J.M. Barrie.  Performances are approximately one-hour in length, and appropriate for ages three and up.  Tickets are $20 each.

Peter Pan and Tinkerbell whisk Wendy and her brothers off to an imaginative Neverland where they encounter Captain Hook and his band of pirates.  In the spirit of the original tale, this production tells the story through the eyes of six children living in Edwardian England. Together, they transform the Darling family's nursery into Neverland, turning pillows into clouds, long-johns into shadows, an ironing board into a ship’s plank, and antique snowshoes into a crocodile's snapping jaws.

The producing company, TheaterWorksUSA, has led the Theater for Young and Family Audiences movement in New York City and across North America for over half a century. Since 1962, the 501(c)3 not-for-profit has captured the imaginations of 100 million new and veteran theatergoers with an award-winning repertoire of over 130 original plays and musicals.

Westport Country Playhouse’s four-show 2019-2020 Family Festivities Series is presented on selected Sundays from December through March, featuring productions with music based on classic and contemporary children’s stories.  Upcoming Family Festivities shows are “Judy Moody & Stink,” produced by Arts Power, on January 12, as the dynamic sister and brother duo go on a musical adventure that leads to fun, mystery, sibling rivalry, and true friendship; “Charlotte’s Web,” produced by TheaterWorksUSA on February 23, as a spider named Charlotte weaves a plan to fool Farmer Zuckerman and help her good friend, a pig named Wilbur, avoid winding up as pork chops; and “The Pout Pout Fish,” produced by TheaterWorksUSA on March 15, as Mr. Fish sets out on a sweeping oceanic quest to find Miss Clam’s missing pearl, and discovers there is more to him than his permanently plastered pout.

In conjunction with the Family Festivities Series, the Playhouse will once again host a book collection for Read to Grow, Inc., a statewide nonprofit organization that provides free children's books to families with limited access and to community resources that serve them.  At each Family Festivities performance, bins will be located in the Playhouse lobby for donations of gently used and new children’s books which will be given to families and programs in the greater Fairfield County area through Read to Grow.

All artists, titles, and dates subject to change.

ABOUT WESTPORT COUNTRY PLAYHOUSE
The mission of Westport Country Playhouse is to enrich, enlighten, and engage the community through the power of professionally produced theater worth talking about and the welcoming experience of the Playhouse campus.  The not-for-profit Playhouse provides this experience in multiple ways by offering live theater experiences of the highest quality, under the artistic direction of Mark Lamos; educational and community engagement events to further explore the work on stage; the New Works Initiative, a program dedicated to the discovery, development, and production of new live theatrical works; special performances and programs for students and teachers with extensive curriculum support material; Script in Hand play readings to deepen relationships with audiences and artists; the renowned Woodward Internship Program during the summer months for aspiring theater professionals; Family Festivities presentations to delight young and old alike and to promote reading through live theater; youth performance training through Broadway Method Academy, Westport Country Playhouse’s resident conservatory program; and the beautiful and historic Playhouse campus open for enjoyment and community events year-round.  Charity Navigator has recently awarded its top 4-star charity rating to the Playhouse in recognition of its strong financial health and commitment to accountability and transparency.