The Nields Return to Voices Cafe in Westport on Dec. 7 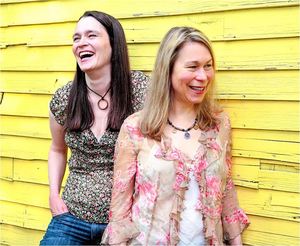 Nerissa and Katryna Nields have been making music professionally since 1991, traveling the country as members of the beloved folk-rock band The Nields. After a 5 year absence, they’re bringing their “masterful mix of modern folk with an alternative edge” music (Minneapolis Star Tribune) back to Westport’s Voices Cafe on Saturday, December 7 at 8:00pm.

The Nields have been lauded for their gorgeous, lilting, sibling harmonies, their wise, classic, folk/pop songs, their hilarious banter on stage, and their generosity and warmth in performance and engagement with their fans.

With countless CDs, major and independent record and publishing deals, performances with The Band, James Taylor, Dan Zanes, 10,000 Maniacs and the Indigo Girls, they have lived the Rock & Roll (& Folk) life.

And now comes XVII, the Nields’ seventeenth album, which is both their most personal and their most community-minded. Well into their third decade as musical partners and, judging by this sublime album, at the very top of their game, the Nields turn to meditations on time, and turning points, their roots and community – both musical and personal – but they also express joy in the present, faith in the future, and a whole lot of hope and promise.

Written by Nerissa, but with significant contributions from Katryna, the songs show a confident songwriter trusting her voice, willing to take leaps, and able to write songs that are deeply personal. “Nerissa wrote my favorite songs she’s ever written and they were more fun to sing than anything I’ve ever gotten to sing.” The songs give Katryna room to stretch her voice, from intimate whispers to full throated soaring. The sisters’ vocal interplay and intricate harmonies—the duo’s hallmark—are as thrilling as ever.

The songs on XVII are about the lessons we hope to learn by midlife: accepting the passage of time and the choices we’ve made, and being thankful for the moments of grace. They are about knowing where we’re supposed to be, and recognizing that there are many things we may never understand. They’re about having faith in something bigger, be it God, humanity, love, or all of the above.

Sing Out! Magazine wrote of the Nields, “Imagine if Natalie Merchant had a sister with an equally good voice singing perfect harmony with her…intimate and electric.” Well you don’t have to imagine this just come and experience the Nields.

Seating at Voices Cafe is cabaret-style (at tables) and table reservations (minimum 4 people) are accepted by contacting David Vita, This email address is being protected from spambots. You need JavaScript enabled to view it. or calling 203.227.7205 x14. Purchase $25 tickets at https://voicescafe.org/show/the-nields/ . Doors open at 7:30.

The Upcoming Voices Café line-up features the Vance Gilbert, and The Black Feathers.