Westport Community Theatre Announces The Tale of the Allergist’s Wife 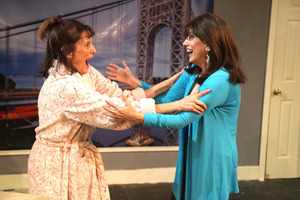 Westport Community Theatre is proud to announce their production of The Tale of the Allergist’s Wife, a comedy by Charles Busch, with Deborah Burke, Andrea Garmun, Randye Kaye, Cody Knox and Jeff Pliskin cast in the production. Performances take place from November 29th through December 15th, on Fridays and Saturdays at 8:00 p.m. and at 2:00 p.m. on Sundays, with a Thursday performance on December 5th at 8:00 p.m. Frederic Tisch directs the play, which is produced by David Victor.

In The Tale of the Allergist’s Wife, Marjorie Taub, a middle-aged woman who lives comfortably with her doctor husband on the west side of Manhattan, spends her days pursuing culture at various museums and theaters. Her efforts to improve her mind and soul have brought her to the conclusion that she will never be more than mediocre; a feeling reinforced by her elderly mother’s constant complaints about her shortcomings and her husband’s altruistic dedication to serving the needs of the homeless. While wallowing in her mid-life crisis, flamboyant childhood friend Lee Green inserts herself into Marjorie’s depression, becoming a permanent guest in the Taub household. Lee succeeds in not only drawing Marjorie out of her dark mood, but in affecting her marriage as well.

Deborah Burke, who plays Green, has been seen on the WCT stage in Dial M for Murder, The Diary of Anne Frank, London Suite, I’m Not Rappaport and The Prisoner of Second Avenue, and in multiple productions with Curtain Call, the Darien Arts Center and Town Players of New Canaan. She has also been producer, set decorator and costumer for many community theatre shows.

Andrea Garmun has been part of the community theater scene for over 30 years and is reprising her role of Frieda, which she has played in two other area productions.Past productions include Fiddler on the Roof, Hollywood Arms, The Last Romance, The Hallelujah Girls, Nuts, To Kill a Mockingbird, The Diary of Anne Frank, The Music Man, The Wedding Singer, Sabrina, and Enter Laughing.

Randye Kaye, who plays Marjorie, is a member of Equity Actors’ Association and is appearing on the WCT stage under a special appearance contract. Kaye has worked as a radio broadcaster (STAR 99.9, WSHU, and her podcast The Life Talk Show) and is a published author, speaker, audiobook narrator, voice talent, teacher and singer. She last appeared as Mae Peterson in Bye Bye Birdie for New Paradigm Theatre. Other productions include Broadway Bound, Nunsense 1 and 3, Into the Woods, Charlie Brown, and Guys and Dolls. Her book and audiobook, Ben Behind His Voices, was nominated for a Publishers’ Weekly Listen Up award.

Cody Knox, who plays Mohammed in Tale, has appeared in WCT’s most recent production, Radium Girls, as well as Playboy of the Western World, Chicago and I Remember Mama through Sacred Heart University’s Theatre Arts Program.

Jeff Pliskin (Ira) has been performing in local theatre for thirty years. He has appeared on the WCT stage in Diary of Anne Frank, Prisoner of Second Avenue, Witness for the Prosecution and Born Yesterday. Other productions include To Kill a Mockingbird, The Odd Couple and Laughter on the 23rd Floor.

The Tale of the Allergist’s Wife is produced by arrangement with Samuel French, Inc. Tickets are $25 ($23 for seniors and $15 for students) and can be purchased at westportcommunitytheatre.com or by calling (203) 226-1983. Westport Community Theatre is located at the Westport Town Hall, 110 Myrtle Avenue.