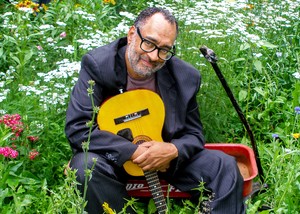 This show follows the release of his latest CD the day before so some new Vance will surely be in the offering!

Vance is an eclectic folk singer who performs heartbreaking songs mixed in with a razor wit guaranteeing the audience an emotional roller coaster ride of emotions and musical styles. The Fort Worth Star-Telegram wrote that he possessed, “…the voice of an angel, the wit of a devil, and the guitar playing of a god…”

Gilbert is well-known for his storytelling prowess and audience rapport. He credits his ability to read and connect with the audience to his days touring with comics like Paul Reiser and George Carlin.

“I’ve learned more from the great comics than music people when it comes to live performance,” said Gilbert, “if you’re not paying attention from backstage to what these guys are doing, you are not doing your homework.”

While firmly established in the folk community Gilbert references a broad musical repertoire that may intersperse rock, jazz, soul or the blues with folk on any given night. Hence the eclectic nature of his performances.

He credits his range going back to his days at Connecticut College. Gilbert said, “I mean, that's where I got to hear everything from Parliament Funkadelic to Bonnie Raitt, and everything in between. You know, Keith Jarrett and Leo Kotke. I was really lucky.”

Connecticut College is also where he learned to play guitar and where he wrote his first songs. Early attempts were, he said, “horrific” but he kept at it. His early zeal for songwriting even caused him to fail, of all things, a poetry class taught by Pulitzer Prize-winning poet William Meredith.

“I kept bringing in songs,” Gilbert explained, “and he pulled me aside at the end of the semester and said ‘you know Vance, professionally I’m failing you for the class because you did not write poetry for me. You were busy trying to put music to things that were not complete.’”

From there Vance moved to Boston and worked as a cook and a multicultural arts teacher until he started knocking 'em dead at open mikes in the vibrant Boston folk scene; then on to New York City where a fortunate meeting with Shawn Colvin led to an invitation to be a special guest on her Fat City national tour where Vance took audiences by storm across the country.

Over a dozen accomplished albums later, with his latest being released the day before his Voices Café appearance, Vance continues to refine his unlikely union of humor, virtuosity, and the unexpected. Whether with classic, original songwriting or ageless interpretations of covers, his is a presentation steeped in deep humanism and bravery, stunning artistry and soul, and contagious, unbridled joy - inarguably the blue ribbons that tie and seal the seemingly impossible package that is ... VANCE GILBERT.

Seating at Voices Cafe is cabaret style (at tables) and table reservations (minimum 4 people) are accepted by contacting David Vita, This email address is being protected from spambots. You need JavaScript enabled to view it. or calling 203.227.7205 x14. Purchase $25 tickets at https://voicescafe.org/show/vance-gilbert/ or $30 at the door. Doors open at 7:30.