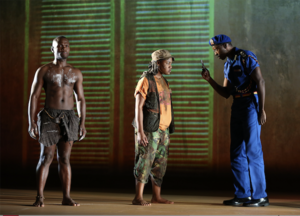 Through conversations with playwright, director, and artists, “Telling Mlima’s Tale” will examine the powerful visual scope and sweep, and vibrant theatricality, of the Playhouse’s 2019 award-winning production, “Mlima’s Tale,” written by two-time Pulitzer Prize-winning Lynn Nottage, and directed by Mark Lamos, Playhouse artistic director. The Playhouse’s staging was the first after the play's lauded world premiere at The Public Theater.

“Mlima’s Tale” at Westport Country Playhouse received five Awards of Excellence from the Connecticut Critics Circle, including best play of 2019; Mark Lamos for direction, Jermaine Rowe for his portrayal of Mlima, Yana Birykova for projection design, and Isabella Byrd for lighting design.

"Getting to chat with the wonderful team from our production of ‘Mlima’s Tale’ reminded me just how joyous and artistically fulfilling that process was,” said Lamos. “Though the play itself is unusual, with its own set of unique challenges, its impact on our artists and audiences was deep and long-lasting. It is the perfect example of everything I’ve missed about creating live theater during the pandemic."

“Telling Mlima’s Tale” will examine how the team worked together to create the world of the play, how they handled their greatest challenges in the piece, and how they collaborated to shape the stage production. The 30-minute video includes short clips and photos from “Mlima’s Tale.”

“Mlima’s Tale” is a theatrical fable about a magnificent and beloved Kenyan elephant named Mlima hunted for his coveted ivory tusks. As traffickers maneuver the illicit ivory market, from Kenya to Vietnam to Beijing, the animal’s invincible spirit follows their path of desire, greed, crime, and corruption.

Due to the global pandemic, the Playhouse campus remains closed since March 2020. The Playhouse management will be following the science, and guidelines from theater artists’ unions and the State of Connecticut Department of Health in deciding when and how to safely open its buildings to the public. Playhouse productions are rehearsed and filmed under Covid-19 safety protocols.

2021 Season Sponsor is the Eunice and David Bigelow Foundation.

All dates, titles, and artists are subject to change.

To purchase tickets to the Playhouse’s virtual season, visit westportplayhouse.org, leave a message on the box office voicemail at (203) 227-4177, or email at  This email address is being protected from spambots. You need JavaScript enabled to view it. . The Playhouse’s physical box office is closed during the pandemic, but staff is working from home, returning phone messages and answering emails. Please understand with the high volume of inquiries, it may take up to 72 hours to respond. Stay connected to the Playhouse on Facebook (Westport Country Playhouse), follow on Twitter (@WCPlayhouse), and on YouTube (WestportPlayhouse).