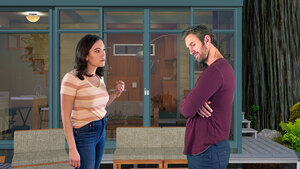 Westport, CT - Westport Country Playhouse will open its all-virtual 2021 production season with the regional premiere of “Tiny House,” a timely new comedy about downsizing, going green, escaping urban life, and fresh starts, written by Michael Gotch, and directed by Mark Lamos, Playhouse artistic director. The production will stream on demand from Tuesday, June 29 through Sunday, July 18.  Exactly 90 years ago on June 29, 1931, the Playhouse staged the first production in its history of over 800 plays.

In “Tiny House,” fireworks fly when family, friends, and quirky neighbors come together for a Fourth of July barbecue at the off-the-grid, isolated mountain paradise of a young, urban couple.

Playwright Michael Gotch said, "When I wrote it, I wanted to explore, through comedy, the disconnect and alienation of opposing opinion in a world increasingly divided by social media, politics, conspiracy theories, and our desire to 'escape' the conflict and polarization to personal (and often imaginary) utopias.”

Gotch explained that what his cast of eccentric characters find is that “of course, the more you try to pull away, the more you realize that connection--and togetherness--is not only inescapable, but also vital if we are to move forward into the Great Unknown of our future with courage, compassion, and full hearts.”

Director Mark Lamos stated, “I fell in love with this play from the moment I read its first pages of dialogue. It's by turns cheeky, smart, funny, deep, moving, and just a touch mysterious. The characters are real, and so is your laughter and investment in them.”

“I’m proud to have gone full circle with this play, from assisting its development through the Playhouse’s workshop, to directing the world premiere with the company of actors for which it was specifically conceived and written,” noted Lamos. “I can't wait to re-achieve it in virtual format for many more people to enjoy.”

Playwright Michael Gotch’s “Tiny House” is his first full-length play. It was a semifinalist at Eugene O'Neill Playwrights Conference (2018), Ashland New Plays Festival (2018), and Forward Flux Three New American Plays (2018).  His second full-length play, “Starter Pistol,” was workshopped at Westport Country Playhouse and had its world premiere at The REP under the direction of Mark Lamos in 2020.  It was the winner of the Ashland New Plays Festival (2019), and a semifinalist in two other competitions. Since the Covid-19 pandemic, Gotch has written and directed a radio play adaptation of Bram Stoker's “Dracula,” and a duet of Agatha Christie short story radio play adaptations, “The King of Clubs” and “The Cornish Mystery,” both currently streaming via The REP's website, www.rep.udel.edu.  Also an actor, Gotch has performed at leading theaters in New York and regionally, including Westport Country Playhouse/REP’s co-production of “A Flea in Her Ear,” as well as over 70 productions as a founding company member at The REP, University of Delaware, where he also teaches in the College of Arts and Sciences.

Director Mark Lamos has helmed many plays at Westport Country Playhouse since 2008, earning Connecticut Critics Circle Awards for his direction of “She Loves Me” (2010), “Into the Woods” (2012), “The Dining Room” (2013), “Man of La Mancha” (2018), and “Mlima’s Tale” (2019).  Under Lamos’ artistic direction, the Playhouse was named “Theater Company of the Year” by The Wall Street Journal in 2013. Lamos’ extensive New York credits include “Our Country's Good,” for which he received a Tony Award nomination. A former artistic director at Hartford Stage, he earned the 1989 Tony Award for the theater's body of work. He was awarded the Connecticut Medal for the Arts as well as honorary doctorates from Connecticut College, University of Hartford, and Trinity College. In 2016 he was the recipient of the John Houseman Award.

Playwright Gotch said, “While safety concerns and social distancing due to the pandemic have forced us to reimagine the play using the magic of digital technology--an 'undiscovered country' for artists working primarily in 'live' theatre--I have no doubt the immense collective talents of Mark, the designers, and cast will bring the same exuberance, creativity, and depth that delighted audiences the first time around.”

Running time is approximately 100 minutes, including a brief intermission between the two acts.  Appropriate for ages 14 and up. More information on “Tiny House” at: https://www.westportplayhouse.org/show/tinyhouse/

Special events surrounding the production will include an LGBT Night Out virtual cocktail party on Thursday, July 1; and an interactive, virtual talkback with panelists on Monday, July 12.

The Playhouse’s all-virtual 2021 Season continues with “Doubt: A Parable,” the Pulitzer Prize and Tony Award-winning drama written by John Patrick Shanley and directed by David Kennedy, Playhouse associate artistic director; two archival productions recorded in HD video; and four Script in Hand playreadings. Full schedule is available at westportplayhouse.org. All virtual content in the Playhouse’s 2021 Season will be available on demand for patrons’ convenience, with open captions in Spanish. Playhouse productions will be rehearsed and filmed under Covid-19 safety protocols.

All play titles, artists, dates, and formats are subject to change.

Due to the global pandemic, the Playhouse campus remains closed since March 2020. The Playhouse management will be following the science, and guidelines from theater artists’ unions and the State of Connecticut Department of Health in deciding when and how to safely open its buildings to the public.

To purchase tickets to the Playhouse’s virtual season, visit westportplayhouse.org, call (203) 227-4177, or email at  This email address is being protected from spambots. You need JavaScript enabled to view it. .Stay connected to the Playhouse on Facebook (Westport Country Playhouse), follow on Twitter (@WCPlayhouse), and on YouTube (WestportPlayhouse).

Founded in 1931, Westport Country Playhouse is celebrating its 90th anniversary year. The mission of Westport Country Playhouse is to enrich, enlighten, and engage the community through the power of professionally produced theater of the highest caliber and the welcoming experience of the Playhouse campus.  The not-for-profit Playhouse provides this experience in multiple ways by offering live theater experiences of the highest quality, under the artistic direction of Mark Lamos; educational and community engagement events to further explore the work on stage; the New Works Initiative, a program dedicated to the discovery, development, and production of new live theatrical works; special performances and programs for students and teachers with extensive curriculum support material; Script in Hand play readings to deepen relationships with audiences and artists; the renowned Woodward Internship Program during the summer months for aspiring theater professionals; Family Festivities presentations to delight young and old alike and to promote reading through live theater; youth performance training through Broadway Method Academy, Westport Country Playhouse’s resident conservatory program; and the beautiful and historic Playhouse campus open for enjoyment and community events year-round. Charity Navigator has recently awarded its top 4-star charity rating to the Playhouse in recognition of its strong financial health and commitment to accountability and transparency.