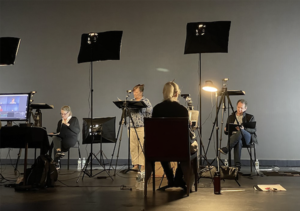 Westport, CT - Westport Country Playhouse will present a Script in Hand playreading of the comedy, “The Savannah Disputation,” filmed on the Playhouse stage and broadcast virtually, premiering Monday, June 14, at 7 p.m., and streaming on-demand from Tuesday, June 15 through Sunday, June 20. The comedy is written by Evan Smith and directed by Mark Shanahan, curator of the Script in Hand series. Running time is approximately 90 minutes. The on-demand version includes subtitles in English and Spanish.

In “The Savannah Disputation,” Mary and Margaret are feisty Catholic sisters living in Savannah, Georgia, who forget all about Southern hospitality when a young Pentecostal missionary comes knocking at their front door to shake up their beliefs. Faced with her persistence, the two sisters are forced to call in their local priest for backup in this blissfully entertaining examination of what it means to truly believe.

"I’m pleased to present our Script-In-Hand reading of Evan Smith’s knockout, theological comedy, ‘The Savannah Disputation’,” said Shanahan. “Smith’s script does something quite remarkable, taking on myths and misconceptions about religion with an abundance of respect and warmth, as he challenges ideas about spirituality with laugh-out-loud zingers. Above all, the play allows us to examine that which often divides many of us as neighbors---and considers the common ground which just might bring us together.”

Playwright Evan Smith was born and raised in Savannah, Georgia. His play “Servicemen” was produced by the New Group in New York City and New York Stage and Film in Poughkeepsie. Both “The Uneasy Chair” and “Psych” were produced by Playwrights Horizons in New York City. “The Uneasy Chair” was revived by the Writers’ Theatre in Chicago and also by 1812 Productions in Philadelphia, which produced the world premiere of his “Daughters of Genius.”  “The Savannah Disputation” was premiered by the Writers’ Theatre in the fall of 2007. His TV pilot “Debs” was produced onstage in Los Angeles by Naked TV, a joint venture of Fox TV and Naked Angels. His plays have been published by the Grove Press, Dramatists Play Service, Inc., Smith & Kraus, Dell Books, and Playscripts.com. He is a recipient of a 2002 Whiting Award. He has a BA in English from Vassar College and an MFA in playwriting from the Yale School of Drama.

Director and curator of the Script in Hand series, Mark Shanahan appeared at Westport Country Playhouse in “Around the World in 80 Days,” “Tryst,” “Sedition,” “David Copperfield,” “Journey's End,” and over 20 Script in Hand playreadings.  He recently wrote and directed the Playhouse’s audio play, “A Merry Little Christmas Carol,” and directed Playhouse Script in Hand readings of “Butterflies Are Free,” with Blythe Danner and Jonathan Groff, and “The Greatest Gift” by Weston playwright David Wiltse. New York stage includes “The 39 Steps,” “Small World,” “Checkers,” “Tryst,” “The Shaughraun,” “As Bees in Honey Drown,” and “The Internationalist.” His directorial work has been seen at Alley Theatre, George Street Playhouse, Virginia Stage, Hudson Stage, Theatre Squared, The White Heron, Fulton Opera House, Mile Square Theatre, Weston Playhouse, Florida Rep, Penguin Rep, Merrimack Rep, Hangar Theatre, The Cape Playhouse, and many more. He is the author of the Off-Broadway and regional hit comedy, “The Dingdong,” and the writer and director of the White Heron Radio Theatre Ghost Light Series, featuring Christopher Plummer, Judith Ivey, and more. He is a graduate of Brown University (BA) and Fordham University (MA, faculty). Shanahan is also curator of Westport Country Playhouse Radio Theater. www.mark-shanahan.net.

Virtual tickets can be purchased as a $20 Individual, a $40 Pair, and as an $80 Household streaming experience. Each purchase entitles the ticket buyer to one individual link.

The Script in Hand Playreading Series is supported by the Burry Fredrik Foundation and the White Barn Program of the Lucille Lortel Foundation.

The Playhouse’s 2021 season includes two new virtual productions: “Tiny House,” a timely new comedy, from June 29 through July 18, written by Michael Gotch, and directed by Mark Lamos, Playhouse artistic director; and “Doubt: A Parable,” the Pulitzer Prize and Tony Award-winning drama written by John Patrick Shanley and directed by David Kennedy, Playhouse associate artistic director, from November 2 through November 21. Two HD video productions from the Playhouse archives will stream on-demand, beginning with the musical, “Man of La Mancha” (2018), from August 23 through September 5, and another TBA, from September 13 - 26.

To purchase tickets, visit westportplayhouse.org, call (203) 227-4177, or email  This email address is being protected from spambots. You need JavaScript enabled to view it. . Stay connected to the Playhouse on Facebook (Westport Country Playhouse), follow on Twitter (@WCPlayhouse), and on YouTube (WestportPlayhouse).

Founded in 1931, Westport Country Playhouse is celebrating its 90th anniversary year. The mission of Westport Country Playhouse is to enrich, enlighten, and engage the community through the power of professionally produced theater of the highest caliber and the welcoming experience of the Playhouse campus. The not-for-profit Playhouse provides this experience in multiple ways by offering live theater experiences of the highest quality, under the artistic direction of Mark Lamos; educational and community engagement events to further explore the work on stage; the New Works Initiative, a program dedicated to the discovery, development, and production of new live theatrical works; special performances and programs for students and teachers with extensive curriculum support material; Script in Hand play readings to deepen relationships with audiences and artists; the renowned Woodward Internship Program during the summer months for aspiring theater professionals; Family Festivities presentations to delight young and old alike and to promote reading through live theater; youth performance training through Broadway Method Academy, Westport Country Playhouse’s resident conservatory program; and the beautiful and historic Playhouse campus open for enjoyment and community events year-round. Charity Navigator has recently awarded its top 4-star charity rating to the Playhouse in recognition of its strong financial health and commitment to accountability and transparency.