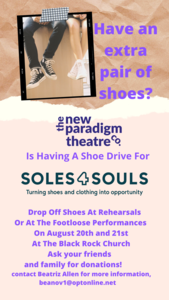 NPT is hosting a shoe drive to help benefit the Program Sole4Souls as part of their live production of Footloose this summer!

Soles4Souls is a nonprofit charity that turns unwanted shoes and clothing into opportunity. The nonprofit donates the shoes to homeless shelters and disaster relief programs in the United States and around the world. It also helps people in developing countries launch and sustain their own small business by selling the donated shoes and clothing.

The idea originated with Beatrix Allen, whose daughter Julia will be performing as one of the young people in Footloose, August 20 and 21st.  Bea is heading up the collection of gently used shoes from the public and cast during rehearsals and shows.  The public and cast can drop off shoes August 1-15th at Emmanuel Church between the the hours of 12-5pm and then during the shows August 20th 7pm and August 21st 2pm and 7pm.

“I believed this would be a great opportunity for our youth to help support others in our community and around the world.” says Bea.

For more information, please refer to the Sole4Souls site here

Group ticket rates are available for 10 or more by writing to This email address is being protected from spambots. You need JavaScript enabled to view it.