Details
Published on Sunday, 07 August 2022 13:15
Written by The Ridgefield Playhouse 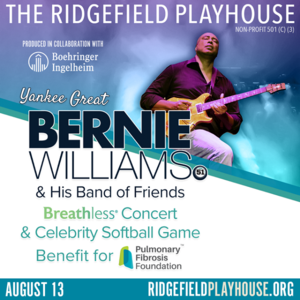 Famed New York Yankees Centerfielder and Latin Grammy nominee Bernie Williams is back with another star-studded day featuring celebrities from the worlds of sports and music, all to benefit the Pulmonary Fibrosis Foundation (PFF).

Following the game will be an outdoor concert with Bernie and his musical guests also on the outdoor field. In the past, Bernie’s musical guests have included Paul Simon and Paul Shaffer, among others and celebrity softball athletes have included everyone from Darryl Strawberry and David Cone to Mickey Rivers and Tommy Lasorda – just to name a few. We’re excited that this performance will include one-of-a-kind jazz master and 3-time Grammy Award winner John Scofield as a special guest with more to be announced!

Don’t miss the chance to spend the day with your family on the field with some of the legends in music and baseball!

Raising awareness of pulmonary fibrosis is close to Bernie’s heart. In 2001, Bernie’s father, Bernabé, passed away from idiopathic pulmonary fibrosis (IPF) and since 2017, he’s been committed to spreading the word about this rare disease via the Breathless campaign. The mission of the Pulmonary Fibrosis Foundation is to accelerate the development of new treatments and ultimately a cure for pulmonary fibrosis.

*Players subject to change without notice.